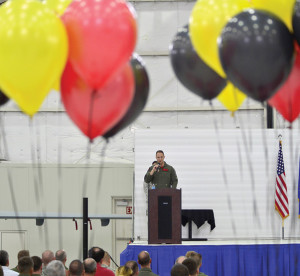 Col. Julian, 432nd Operations Group commander, speaks during 432nd OG 25th Anniversary celebration May 20 at Creech Air Force Base, Nev. The ceremony highlighted the past, present and future contributions of the men and women of the 432nd OG to the MQ-1 Predator and MQ-9 Reaper community.

CREECH AIR FORCE BASE, Nev. — Since its inception Sept. 18, 1947, Airmen have dedicated blood, sweat and tears to create the most advanced and robust Air Force this country has ever known.

These units commended their Airmen assigned to the 432nd Wing/432nd Air Expeditionary Wing for their tireless devotion in support of MQ-1 Predator and MQ-9 Reaper operations.

“Today, we say remotely piloted aircraft, but then [in the beginning] they were unmanned aircraft systems,” said Col. Case Cunningham, 432nd WG/432nd AEW commander, while reflecting on the 432nd OG’s history. “Even the name change is a reflection of how far we’ve come.”

In addition to MQ-1 and MQ-9 combat operations, the 432nd OG is home to the 11th Attack Squadron, an in-house formal training unit for pilots and sensor operators to learn and perfect essential launch and recovery techniques for aircraft operations.  The group is also responsible for all air traffic control, airfield management, and weather services for operations at Creech AFB.

Originally activated as an F-16 Fighting Falcon group at Misawa Air Base, Japan on May 31, 1991 and deactivated on Oct. 1, 1994, the 432nd OG was reactivated on May 1, 2007, to operate MQ-1 and MQ-9 aircraft providing combat command and control, tactics development, intelligence support and standardization.

“This wing and the 432nd operations group have come a long way since we reactivated in 2007,” said Col. Joseph, 432nd OG commander. “In the past couple of years this group has continued to improve with leaps and bounds.”

“I am not one to focus in on any milestones such as a 25th Anniversary,” said Col Matthew, 432nd MXG commander. “Instead my focus every day is on how privileged and honored it is to be associated with what I consider to be some of the best Airmen our Air Force and nation has to offer.”

In addition to providing maintenance capabilities, the men and women of the 432nd MXG consistently surpass Air Combat Command standards for maintenance.

Among the accomplishments is their continuous mission capable rate and quality assurance rates. Both far exceeding the 80 percent ACC standardized rates for maintenance. 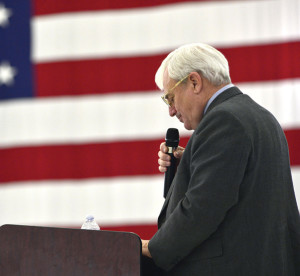 Retired Lt. Gen. Robert Dierker, former 432nd Operations Group commander, addresses the 432nd OG during the 25th Anniversary Birthday celebration May 20. The 432nd OG is responsible for the employment of MQ-1 Predator and MQ-9 Reaper for over 18 squadrons around the U.S. Air Force, and Air National Guard.

“The MXG continues to be honored with awards at the 12th AF, ACC, and AF level,” Matthew said.  “In fact the 432nd Maintenance Group was selected as the 2014 ACC nominee for the Maintenance Effectiveness Award, Category 2, and Medium Aircraft Maintenance Organization.”

“I am extremely proud of the dedication, devotion, and professionalism that the men and women of the 432nd Maintenance Group exhibit in support of our RPA operations,” said Matthew.

It also has unique functions as well to include the Wing Operations Center that exercises command and control over 35 combat air patrols worldwide in various areas of responsibility.

The unit previously served at Misawa Air Base, Japan, from May 1991 to October 1994.

“The OSS supports combat operations for not just the group but for the wing and the air expeditionary wing which encompasses not only squadrons here at Creech but also the ANG squadrons across the US,” said Lt. Col. Scott, 432nd OSS commander.

“The 432nd Wing as a whole continues to evolve and I think that it’s really found its home in the RPA business and I think it’ll be around for the next 25 years to expand and grow,” said Scott.

During the 432nd OG change of command ceremony on May 23, 2016, the previous commander reminisced on his time with the Airmen who maintain, operate and support MQ-1 and MQ-9 operations.

“I’ve seen the 432nd OG Hunters excel at being people of action,” said Col. Julian, former 432nd OG commander. “You innovate, and don’t wait for others to solve problems for us.”