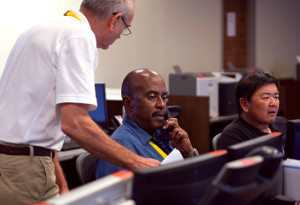 Marion Watson (left) and Milt Waddell, air operations cell replication chief of combat operations with the 505th Combat Training Squadron, coordinate a training scenario during Warfighter Exercise 17-4 at Hurlburt Field, Fla., April 5. The main mission of the 505th CTS during the exercise was to supply the Army with a simulated air operations center that supplied air power for their ground-targeting needs.

HURLBURT FIELD, Fla. — More than 95 percent of the Airmen assigned to the 505th Combat Training Squadron prepared for and participated in the Army’s Warfighter Exercise 17-4, April 3-11.

Conducted jointly by the Air Force and Army, WFX provided critical, simulated training to prepare units for real-world war scenarios. WFX applied pressure to all warfighting functions simultaneously while conducting operations in a tactical and computer-based environment. WFX 17-4 was one of five training events that the 505 CTS will support this year in support of Army training.

The main mission of the 505th CTS during the exercise was to supply the Army with a simulated air operations center that supplied air power for their ground-targeting needs. Additionally, the 505th CTS provides the constructive model Air War Simulation aka AWSIM to fly out the Air Tasking Order that the AOC replication Cell creates for the exercise.

“On a daily basis, we went through strategy development, targeting exercises, how we were going to allocate assets and the execution of the air tasking order based on JFACC objectives,” said Milton Waddell, AOC replication cell chief of combat operations with the 505th CTS. “Additionally, we worked with the Army in building airspace and fire-support coordination measures.”

Working behind the scenes and on a 24 hour battle-rhythm, the 150-personnel, manned AOC integrated with the participating Army units as they worked to achieve their objectives.

“All moving parts have to come together, and if they don’t you find alternate ways to achieve the objective,” Waddell said. “In the real world, even when you do all this planning, the enemy has a vote. You never know what the enemy is going to do, but in an exercise environment it is backwards.”

While the men and women who worked in the AOC knew what the adversary was going to do, but they did not know how the Army will respond to the adversary’s moves.

“You have to adapt to what the Army is doing,” Waddell said. “Whether it is successful or unsuccessful, you still have to make sure they are achieving the training objectives you want them to achieve.”

“What made this WFX so much different from the others is that they incorporated a Joint Air Component Coordination Element (JACCE),” said Lt. Col. Merrick Green, the commander of the 505th CTS.

“Adding a JACCE to the exercise complicates it a little because the CTS has an Air Force element to react to along with the Army,” added Green.

As part of their mission to provide constructive models and virtual battlespace for exercises, testing, and experimentation, to enhance command and control training for the joint air component at the operational level of war, the 505th CTS and 505th Command and Control Wing Detachment 1 has been the lynchpin of WFX for multiple iterations.

“The 505 Command and Control Wing Det 1 at Leavenworth, Kansas, and the 505th Combat Training Squadron, Hurlburt Field, come together during every WFX to provide the Army with the air power expertise during their exercises,” said Col. Travis Ingber, the commander of 505th CCW Detachment 1. “Participation in the Warfighter exercises allows us to support operational Army training and to sharpen our skills as a team to provide the synthetic battlespace and the AOC experts for Blue Flag and the other 20 plus exercises that we do a year.” 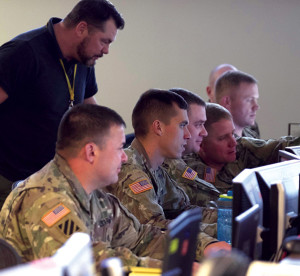 The 505th CTS and the 505 CCW Det 1 delivered a unique capability that provided the Army with the tools necessary to achieve their training goals. The 505 CCW is the only Wing in the Air Force that has this capability and is preparing Joint Warfighters and the Operational level of War.

“It is sometimes a delicate balance during these major warfighter exercises to provide an accurate Air Component replication for the Army using Airmen who want to do their very best to win, while not over-relying on Air Force assets,” Ingber said. “The Army has a primary training objective in these exercises to hone their skills at integrating joint fires to defeat the enemy. In addition to the air component assets we provide, those joint fires also include Army-guided artillery and indirect munitions along with Army attack helicopters. We want to see a balance between all of those assets during these Warfighter exercises.”

The AOCRC consisted of uniform and civilian members of the 505th CTS, along with a Joint Training Coordination Program-funded contract team.

“We connect (federate) the Air Warfare Simulation and WARSIM constructive (synthetic) models with one another to create a battle space that allows the Army and Air Force to deal with complex and real problems that they would encounter in normal fog and friction of war,” Ingber said. “The 505th CTS is the only squadron like it in the Air Force. The capability to replicate AOC processes and products within the battle rhythm of the joint task force training audience is critical to the success of training events such as this.”