The competition is hosted by the U.S. Cavalry Association. At the conclusion of the competition, the 11th ACR Horse Detachment earned the Most Outstanding Military Unit for the third time.

“We travel to the National Cavalry Competition each year to compete against other active duty Horse Detachments, as well as allow our Troopers to see how far they have come in such a short time,” said Capt. Michael Gates, Horse Detachment officer in charge. “The competition is not solely won on the back of a horse. Troopers must be smart and memorize courses and target layouts after only seeing them once, so mental agility is a focus of our training team daily.

“We’ve also had plenty of classroom time to go over rules and penalties so that all Troopers can perform in full confidence that they know where they stand.”

“Each event grades riders on slightly different criteria that are specific to the test, but the criteria that are graded in all events include horsemanship, the appearance of Trooper and horse, and health of the horse,” said Howze. 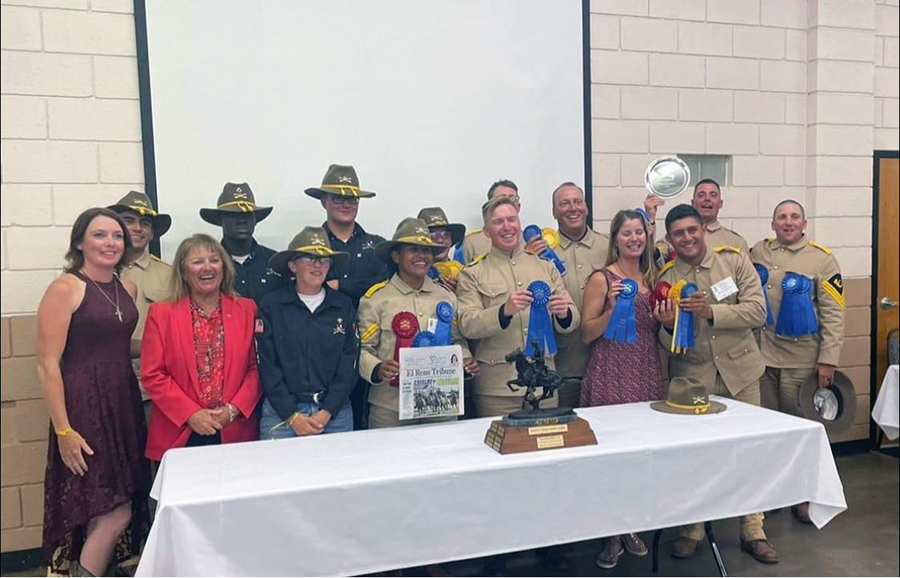 The following Troopers represented Fort Irwin and the 11th ACR Detachment at the competition.

Spec. McDaniel on Charger at Level 1

The 11th ACR Horse Detachment was granted the status of Special Ceremonial Unit in 2002 for the purpose of aiding the recruiting effort, community relations, and participating in formal military and civilian ceremonies. All spots in the Horse Detachment are organic to the 11th ACR, which enables them to be a diverse unit with many MOS’s and backgrounds. The mounted Troopers defined the 11th Cavalry at its creation in 1901, and it is the job of the Horse Detachment to keep the history and traditions of the Cavalry alive today. The Horse Detachment serves as a one-year assignment, during this time troopers learn how to properly care for the horses, groom the horses, become expert riders, and represent the 11th ACR in a way that many don’t have the opportunity to.

Before heading to Fort Reno, the troopers hosted an internal competition Aug. 26 that was open to the local community.

The Horse Detachment acknowledged several groups on social media, who made their participation in the competition possible:

* The 11th ACR Command Team for enabling us to keep the history of the Cavalry alive.

* Our wonderful trainers who work hard to ensure we train to succeed.

The families of our Troopers who understand the long days and even travel to watch us perform.

* And of course, both past and present Blackhorse Troopers, the finest in the land!