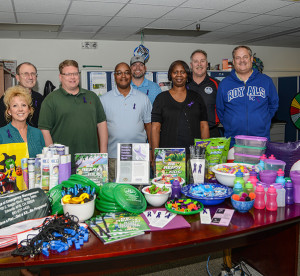 Edwards AFB Emergency Management filled and donated goodie bags, complete with candy, to local children who have been victims of domestic violence and will not be able to go trick or treating this year. The items included Air Force Be Ready coloring books, Frisbees, whistles and more. Donations of candy came in from various individuals in the Emergency Management Office.

Each Halloween, children all over the United States dress up in costumes and go trick-or-treating.

At the neighbors’ houses, they may see ghosts, witches, skeletons and all kinds of images that evoke fear.

But for the ones who have experienced and witnessed domestic violence, it’s their own home that is truly scary.

October is recognized as Domestic Violence Awareness Month. This Year, Edwards AFB Emergency Management decided to donate goodie bags, complete with candy, to local children who have been victims of domestic violence. The items included Air Force Be Ready coloring books, Frisbees, whistles and more. Donations of candy came in from various individuals in the Emergency Management Office.

Stefanie Warner, 812th Test Support Squadron, Engineering Development Flight, volunteered to pack bags with the EM folks and went with the group to deliver them throughout the local area. Even before the children saw what was in the bags, “they were just so excited that there was something, anything new coming through the door for them.”

The Warners have also given base personnel written materials about domestic violence and purple ribbons to wear to show support for victims.

The National Coalition Against Domestic Violence defines domestic violence as the willful intimidation, physical assault, battery, sexual assault and other abusive behavior as part of a systematic pattern of power and control perpetrated by one intimate partner against the other. It encompasses physical and sexual violence, threats and emotional or psychological abuse.

Domestic violence survivor “Natalie” shared that the month is about reminding people that “you should be safe, always, in your own home.” Looking back, Natalie believes that of all the warning signs, the biggest was isolation.

“[The perpetrator’s] main thing is to get you isolated so you have no support. You lose your identity,” she recalled. “To me, being a survivor is I made it out alive and I was able to protect my [child] and break the cycle of violence.” 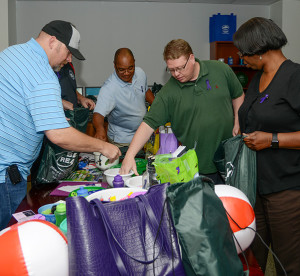 During her time in an abusive home, Natalie experienced a fractured skull, a bulging disk in her neck and had stitches ripped out after a trip to the hospital. Her husband even threatened to end her life. After several attempts she was finally able to escape and eventually re-united with her family.

For most domestic violence victims, it takes several attempts to leave an abusive relationship. According to the NCADV there are many reasons that victims stay in abusive relationships. Among them, threats against family members, financial dependence and fear of losing their children.

Natalie hopes that by sharing her story, others will realize that domestic violence can happen to anyone and that it’s important to know the signs and symptoms of abuse.

If you or someone you know is being abused, call the National Domestic Violence Hotline at 800-799-SAFE (7233). For more information visit the U.S. Department of Justice Office on Violence Against Women at www.ovw.usdoj.gov.

‘A blood transfusion saved my life’