“I’ve come a long way from picking cotton in the fields with my grandfather.”

He was born on an Arkansas bridge during the Great Mississippi Flood of 1927. Son of a logger and farmer, Smith grew up in Pine Bluff, Ark. His mother, who cared for him and his two siblings, left school at the age of 13.

He credits his upbringing to his grandfather who Smith picked cotton with. His grandfather taught him the value of hard work and perseverance.

Smith graduated from high school in Fordyce, Ark., at the age of 16. While there, he attended preflight aeronautical classes, changing the course of his future.

“I wanted to be a doctor,” he said, “but the military said they needed black mechanics, so I was inducted into the U.S. Army Air Corps at 16. Looking back now, they did me a favor, I’d say.”

Smith vividly remembers being a scared little black boy from the country in 1943, riding a bus from Camp Robinson to Sheppard Field, Texas, for basic military training, and then later to Chinook, Ark., for aircraft and engine training.

“Everything was segregated,” he said. “The ride to training, the barracks we lived in, even the hours we had to shop at the base exchange and eat at the mess hall were separate. 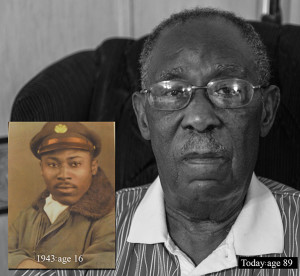 Retired U.S. Air Force Master Sgt. Leroy Smith became a Tuskegee Airman at the age of 16 in 1943. Smith said getting to know the Tuskegee aircrew was one of his best memories.

“I remember (white) people asking us, ‘What are you doing here?’ and assuming we blacks were the cooks and bottle washers,” Smith recounted.

However, segregation did not break his zeal. Smith charged forward and met every obstacle with faith and optimism. He leaned on his Baptist upbringing and grandfather’s lessons about having strength–especially during the harder days.

“I never retaliated … even when they would call us monkeys,” Smith said. “I just believed those people were ignorant and someday it would be better. My grandfather always said, ‘There’s only one race of people: the human race.’”

And so, while the human race was focused on World War II and which side would prevail, Smith set course for the European theater. He was assigned to the Tuskegee unit, where all barriers fell away. He was no longer a black mechanic.  He was simply an Airman.

“I was scared and proud when I arrived in Italy,” Smith recalled. “I was with an all-black crew that I could identify with. I could actually communicate with the pilots; the officers respected us as the younger members. I didn’t have to just do my job and shut my mouth. We all had a good relationship; it was one of my best memories.”

The Tuskegee Airmen are typically known as an all-black fighter and bomber pilot aircrew who fought in World War II. However, that name, Tuskegee Airmen, also encompassed navigators, mechanics, instructors, crew chiefs, nurses, cooks and other support personnel for the aircrews.

“I loved being called a Tuskegee Airman,” he said. “I didn’t know that name would be what it is today, but we sure had a lot of unit pride, and there was reason for it.”

The crew was assigned to the 332nd Fighter Group and flew heavy bomber escort missions with P-47 Thunderbolts and later the P-51 Mustangs. To distinguish themselves, they painted the tails of their aircraft red, coining themselves the Red Tails.

“We never lost a bomber,” Smith bragged, smiling. “Nope, we never lost a plane. It did me proud to say I was a part of this. We were good, and we were finally recognized for it. I’m a low profile guy, but the recognition was nice.”

In 1947, Smith’s tour with the Tuskegee Airmen ended, but the Red Tails’ legend influenced the integration of races in the armed forces. Smith soldiered on as he transitioned from the Army Air Corps to the infant Air Force.

He continued serving throughout the Korean War and Vietnam Conflict, fulfilling 25 years in the U.S. Air Force and retiring in 1968 as a master sergeant.

Looking back on a lifetime of perseverance and achievement in the face of adversity, Smith reflected on the progress visible in the America of today.

“It makes me feel very proud to see what the military and the world is like now,” Smith said. “We’re doctors and lawyers now. Hey, look at our president. We’ve come a long way.”