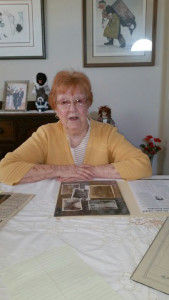 Antelope Valley resident Pauline Killough is a survivor of the infamous Holocaust. She recently invited Aerotech News and Review into her home to share her story, and to let nonbelievers know that the Holocaust was real.

Lancaster, Calif., resident Pauline Killough is living the American dream, but life for this naturalized citizen wasn’t always so rosy.

“I lived it, it happened,” she says in a voice that can tear through one’s heart.

Killough was just a little girl at the time, not more than 7 or 8 years old, too young to understand what was going on and too young to remember all the life altering events in order, but old enough to have felt the effects of the Nazi movement, effects that continue to haunt her still today.

“I didn’t understand what was going on, I didn’t know why people hated me, I was always afraid of the other kids who weren’t Jewish,” she remembers.

Jews, she says, were hated simply because they were Jewish.

Born to a poor family in Bilgoraj, a small town in south-eastern Poland, Killough says life there was simple. They didn’t have running water or plumbing in their home, “We had an outhouse and a well,” she recalls, but says she accepted life the way it was and didn’t realize it was different anywhere else.

With the exception of the hatred she felt from the non-Jewish community, little Pesha’s life was uneventful, “Until the war broke out,” she says in a barely audible voice.

“The Germans started dropping bombs on our town,” she recalls. A very young Pesha and her two sisters were home alone and terrified. 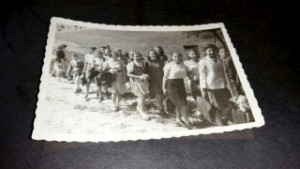 Pauline Killough shares a photograph of herself with other Holocaust survivors who were taken to an American Dislocated Persons camp at the end of World War II.

“Our neighbors came and got us. We all ran and crossed the river. The entire town was bombed, our house was gone.”

When little Pehsa’s parents returned, one look at where their house once stood, they thought their children were dead. What wasn’t destroyed by the bombs themselves was wiped out by fire.

The Bitterman family was eventually reunited, “there was a lot of crying that day,” she recalls, but their tears of joy were short lived as the family was about to experience life on the streets for the next several years.

“The Germans were killing babies, destroying Jewish businesses, we Jews knew we were in trouble,” Killough says.

“We did a lot of running and hiding, my older sister, Sonia, often had to carry our 2-year-old baby sister Hanna. The older I got the more afraid I became,” she remembers.

“The streets were full of German tanks fighting the Poles,” Killough remembers the Germans lining up Jewish men in front of a firing squad. “My father, Jacob, was one of those men,” she painfully recalls. “But he and some others, realizing they were about to be shot, decided they had nothing to lose and resolved to take their chances and run.” Her father escaped with his life.

Killough said they were joyful that her father escaped the firing squad, but said they believed it was just a matter of time before they all died. 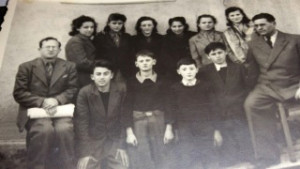 “We had nothing, no home, no food and we didn’t know what tomorrow would bring,” she said.

“My mother used to tell us a person is stronger than iron, I do believe that is what kept us going,” she says.

Killough said when Russia got into the war and started fighting the Germans they told the people of Bilgoraj to go to Russia and the Bitterman family did just that. “We were transported in cattle cars,” she remembers.

Killough describes life for the Bitterman family and other Jews that fled to Russia as ‘sorta normal’ from 1939 to 1942, until, Killough says, Germany attacked Russia and started bombing Kiev, the largest city in Ukraine [then a part of the Soviet Union].

Soon after, the town of Berdichev, where the Bitterman family had settled, was also being bombed. “We were on the run again for the next five years,” Killough sighs.

“We were homeless and country-less,” Killough recalls. “Have you heard the expression the wandering Jew? That was us.”

Killough remembers her family being picked up and detained because they had no papers, “They eventually let us go because my parents had three young children and officials decided we weren’t spies.

Winters were the worse, “They were cold and our clothes were wearing out.” Killough remembers wearing rags on her feet because she didn’t have shoes, “No shoes, no food, no money.”

“Once at a train station we sat on the train bumper for warmth,” Killough recalls. “We were so cold, and we were stuck at the train station for weeks. Finally when a train came by we climbed on the roof of the train laid down and held on for life as we traveled to another town.” 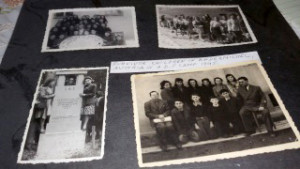 These are the only photographs Pauline Killough has left that documents the end of the Holocaust.

Homelessness, cold winters and hunger weren’t the only obstacles the Jewish refugees had to face.

“Once while waiting two weeks for a boat to take us across the Caspian Sea, many of us came down with Malaria. Killough said her family was lucky, neither her parents nor sisters contacted the disease.
“Eventually we were taken to Siberia by the Russians,” Killough said. She said life there was “fend for yourself.”

“We lived in a big building, we were a family of five, we had five bunks,” she recalls.

Killough remembers her mother searching through garbage cans to look for food.

“My sister Sonia went to a trade school, she got food at school, she used to save her bread and bring it to us,” Killough said. She eventually lied about her age to get into the school; she was given hot soup and bread once a day.

“The Russians did save our lives, but the rest was up to us, it was all about fending for ourselves,” Killough said.

“I remember finding an abandoned house, it was full of pigeons. We killed them and cooked them,” she said.

The Bitterman family stayed in Siberia quite a long time, Killough doesn’t know for sure just how long, but says eventually they ran away and made their way back to Poland.

“It took us six months to get back to Poland,” she said, and wondered if anyone can imagine what it’s like to not be able to bath for six months. ”We were infested with lice.”

When they arrived in Bytom, Poland, the family learned that the war had ended. “The American Red Cross was collecting Holocaust survivors and transported us to a Dislocated Persons Camp, known then simply as a DP Camp.

The Bittermans spent four years in the DP camp, “We were in the American zone and life started looking better,” Killough said.

The Bittermans had relatives in America who arranged for visas.

“It took four years, but the day we arrived in America was the best day of our lives,” Killough says.

Killough got a job in a tie factory in New York and became the sole supporter of her family. “I was the breadwinner for the four of us until I got married,” she said.

Little Pesha Bitterman arrived in America in 1949. The law was one had to be in the country five years before becoming a citizen. “I became an American Citizen in 1954, five years to the day!” she states proudly.

Killough’s message to the nonbelievers, “You can’t say the Holocaust didn’t happen, it happened, I lived it!”