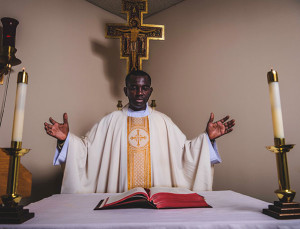 Chaplain (Capt.) Emmanuel Enoh, 386th Air Expeditionary Wing Catholic chaplain, reads a prayer from the Missal. The Missal is a liturgical book containing all instructions and texts necessary for the celebration of Mass throughout the year.

In Abak, Nigeria, Dec. 8, 1974, a mother, nine-months pregnant, feels that her baby is ready to arrive. The duration of the journey to the hospital is longer than her new child can wait. She gives birth to her fourth child, on the side of the road.

“So, I’ve always been on the road,” laughed Capt. Emmanuel Enoh, 386th Air Expeditionary Wing Catholic chaplain. “I was the one who was always going somewhere, like when I went away to boarding school, or left the country for college and again for missionary work. I was born on the road, and I’ve been traveling it all my life.”

Raised in Nigeria, his hometown was frequently a host for Irish-Catholic missionaries, from whom Enoh took inspiration. From a young age, he was fascinated with their devotion and the great risks they took on their missions. He studied them at the Catholic boarding school he attended as a child.

“I was fascinated with what they did, even going back to the 1700s,” said Enoh. “They would cross the seas; many of them dying on the voyage, and more contracting malaria when they arrived in Africa. I wondered what inspired them. What was their secret that in the face of death, they were not deterred?”

This curiosity led him into missionary work. He joined a hometown missionary group and entered the priesthood in Owensboro, Ky., after completing his master of divinity degree.

Enoh’s first assignment as a priest was to the Saints Peter and Paul Catholic Church in Hopkinsville, Kentucky, thirty minutes from Fort Campbell, Ky. It was there that Enoh had his first experience with the military through a nearby mental health facility. He received a call, saying that a post-traumatic stress disorder patient needed to talk to a priest.

“The patient was suffering from her experiences in the Iraq war,” recalled Enoh. “She just wanted to talk about her experiences, so we spent the whole night talking. I couldn’t relate to her experiences, but by being there and letting her talk, it gave her comfort. That experience drew me to serve as a military chaplain.’”

He entered the Air Force Reserve as an individual mobilization augmentee, assigned to the 42nd Air Base Wing, Maxwell Air Force Base, Ala. After a year of reserve duty, he came on to active-duty and was reassigned to the 97th Air Mobility Wing, Altus AFB, Okla. Enoh’s service has given him a broader perspective on the differences between serving his parish and serving his country. He understands that while he is still a Catholic priest conducting the services associated with that role, his duties are to serve all Airmen, regardless of faith.

“The person who needs help isn’t necessarily Christian, or Muslim or any religion,” explained Enoh. “They might just need another person to listen, or show them direction. It’s about being there for the Airmen, not necessarily giving them my perspective as a Catholic priest.”

As an Airman, Enoh has embraced the Comprehensive Airman Fitness model, comprised of a multitude of targeted programs and activities, as well as resiliency skills taught to enable Airmen to make sound choices. The CAF model stresses the importance of mental, physical, social and spiritual fitness as a means of creating resilient Airmen capable of winning the nation’s wars.

“The four pillars of the CAF model are like magic,” said Enoh. “If you put that into practice, life will be easier. For the most part we’ve listened to it so much that sometimes you tune it out, but it is something I believe in. Chaplains are in the business of taking care of people, but you first have to take care of yourself.”

“I’m always asking myself if I gave my all, and if I really helped that person,” said Enoh. “A few times I’ve run into someone who came to me for help and been told, ‘thank you chaplain for being there for me’. That changes my life every time I hear it.”