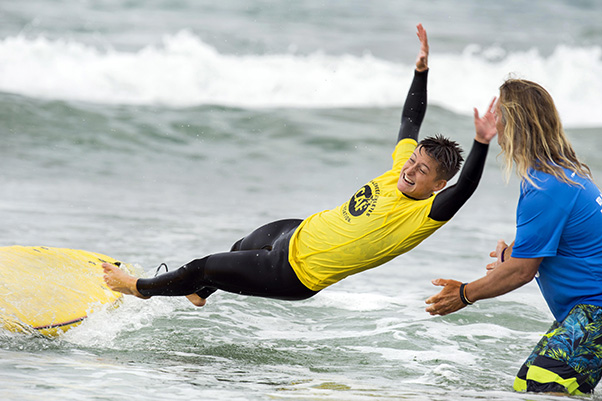 Navy Seaman Emily Wallace reacts to a moment free from her severe pain during a surf therapy session for Naval Medical Center San Diego patients in Del Mar, Calif., Sept. 14, 2017. The medically appointed surf therapy helps her to manage her pain and provides her with a reprieve from chronic pain without medications.

After losing his arm and leg in battle, a Hawaiian soldier being treated at the Naval Medical Center San Diego told his doctors that more than anything else, he wanted to surf again.

Almost 10 years later, the hospital’s surfing clinic staff has assisted more than 1,500 wounded, ill and injured service members from all service branches in their recovery through surfing.

“I remember at the time, I told him we’re going to go surfing but I had no idea how we’re going to go, with him missing an arm and a leg,” said Betty Michalewicz-Kragh, surf therapy program manager and exercise physiologist with the Health and Wellness department at the medical center, also known as “Balboa.”

Michalewicz-Kragh said she looked for ideas on the internet and eventually called a Brazilian above-the-knee amputee who came to San Diego and assisted Michalewicz-Kragh in training the soldier for five weeks.

The patient started surfing. “And as a result of him going surfing, many other wounded warriors have gone surfing, and it’s been an amazing journey,” she said.

Today, adaptive surfing is more mainstream, with its third world championship taking place in December in La Jolla, California. Michalewicz-Kragh said when the clinic first started using surfing therapy, she only thought of the physical benefits, such as the cardio ability and strengthening the posterior muscles.

“We ended up realizing the benefit surfing has for post-traumatic stress disorder and other mental health issues,” she added. “It’s been an amazing journey.” 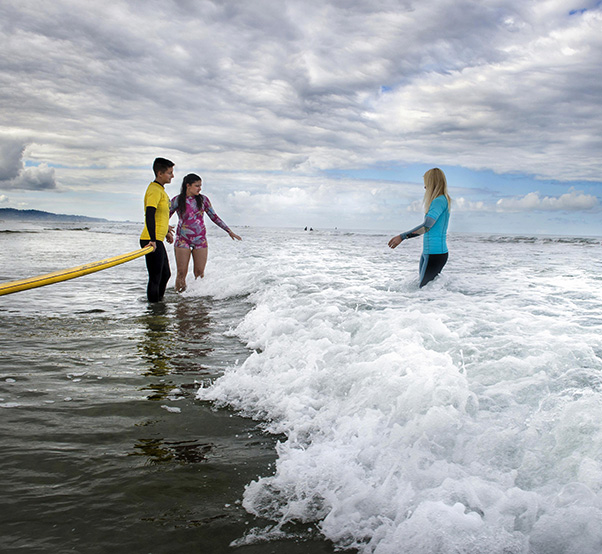 Finding fitness, friends
Surfing is like a medication, and all the side effects are good, Michalewicz-Kragh said. “A person may come here to surf but they end up finding a community,” she explained. “The side effects will be that his fitness level will be better, his cardiovascular ability improves, he gets stronger, and he meets a lot of people. The community integration aspect is really important, so there are many benefits to surfing.”

She said patients don’t need to know how to surf before showing up and they can attend the swim clinic beforehand. “Our goal for the patients as they come to the program is to find out how they can make their life better by surfing and to have the ability to surf and become a better surfer,” she said. “You will not be Kelly Slater after six weeks, and not after 12, but you will have the tools to know how to practice and learn how to surf on your own safely and independently.”

“I always check with them at the beginning of class as they check in, where they’re hurting, so I can make sure they focus the class on things that will be beneficial to any particular needs they may have and then ask them afterward,” Christensen said. “I’ve had feedback from some patients who say that this is the only thing they’ve found that helps them feel better, and some who say, ‘I hated yoga, but now I love it,’ so that’s encouraging. It’s a great setting. It’s not me; it’s the beach.”

Christensen said programs such as the surfing clinic are important for wounded warriors. “It gives them hope and confidence, which will help them with their depression if they have it,” she said. “It’s giving them hope that they can get better, confidence in their abilities to do so, and then ability and new skills and new talents.” 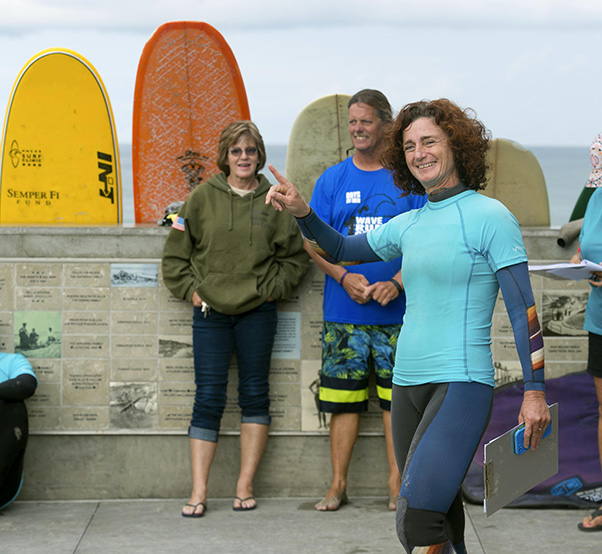 Volunteers
The patients can go through the six-week program twice to learn surfing, and those who transition out of the military and stay in the local area can continue with the program. About 50 surfers — retired firefighters, police officers and military, along with the Del Mar lifeguards — volunteer to work with the patients in the surf therapy clinic.

Former Air Force Sgt. Warren James, a Vietnam veteran, has been volunteering for the past two years. “I’m really good at teaching the beginners,” the former avionics technician said. “It’s very rewarding for me, and I can see it’s very effective for the patients.”

James, who repaired radios and radar equipment on F-4, C-130 and C-40 aircraft during his military service, said he enjoys volunteering with service members and fellow veterans. “It’s overwhelming sometimes. They have injuries, and I didn’t really get injured, so I feel for them,” he said. “I saw a lot of bad things, and I don’t say much about it, but it’s really good to be able to talk to somebody else about it. I know how they feel … I didn’t have PTSD, but I can sense when they do, and it’s really comforting to help them and know that it’s helping me, too.”

Surfing clinic participants gain confidence as they make progress in the surfing clinic, he said. “If they had a physical injury, they recover quicker,” he added. “They take less medication. It’s just a really good program.”

Patients’ opinions
Retired Marine Corps Sgt. Toran Gaal, a bilateral amputee who lives in Valley Center, California, said surfing brings him closer to those he lost in combat. He was injured in an improvised explosive device blast in Afghanistan in 2011.

“To be in a place like the ocean, it allows me to be closer to those people and feel like I’m lifted up,” Gaal said. “I feel like I’m around them when I’m out there. I feel like they’re around me, watching over me, making sure I’m safe. The ocean allows me to feel close to them, as well as gain relationships with some of the volunteers to be happy.” 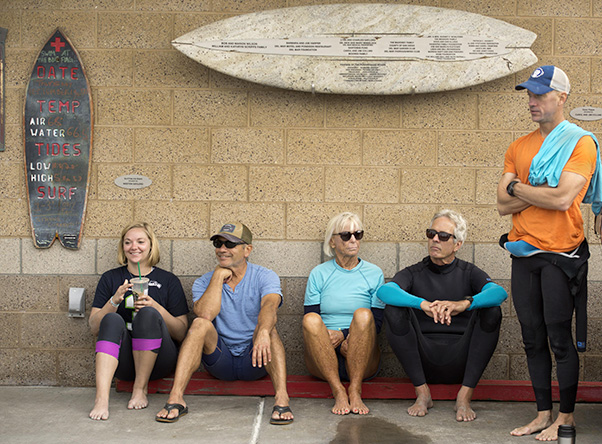 The surfing clinic is about surfing and reintegration into the community, Gaal said. “It’s not just about gaining independence and going out and surfing. It’s about reintegration and transitioning,” he said.

Gaal said he and his wife, Lisa, have become friends and family with Bob Bishop, one of the volunteers, with whom they have regular lunches at Bishop’s home.

“It’s just a sense of family for me, and my wife knows that. She knows that when I’m around these people, I come back happier because I enjoy being in their presence and the negativity is not there. They’re all positive influences,” Gaal said.

Marine Corps Cpl. Leighton Anderson, a Gardena, California, native who was injured during an MV-22 Osprey tilt-rotor aircraft crash in 2016, said he enjoys the surfing clinic as well.

“I always wanted to learn how to surf, since I’m from California,” Anderson said. “I tried it three times in my life and never did it. I was like, ‘Let me try it through here,’ and then after that, I was hooked. It was pretty sweet. I love it. Everybody’s really nice and supportive.” 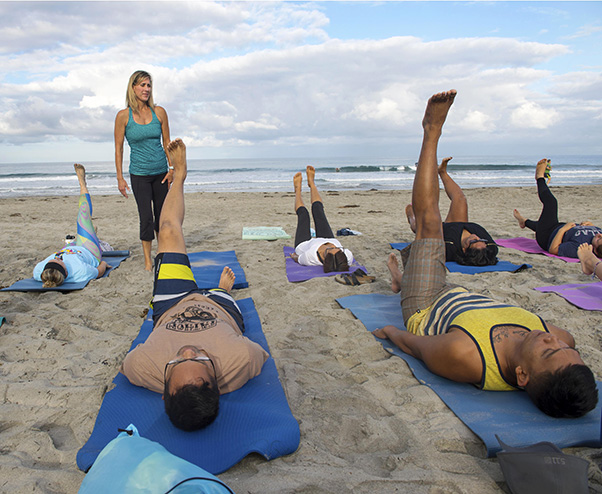 “I had so many barriers, because once I was injured, I was like, ‘I don’t know if I can do that. I might hurt myself.’ I have a little PTSD, and I didn’t think I would enjoy anything. Once I tried it, I broke down a lot of barriers I had mentally and physically. I had weak tendons in my hand and foot, but with surfing they’re starting to get better. And mentally, it makes me happy. It’s just something everybody should take on.”

“Surfing therapy is amazing,” James said. “The program works, because it keeps them not thinking what they would normally would be thinking when they’re at a medical appointment. But here, we just talk about other things, and that’s why it works.

“It’s different,” he added. “I definitely suggest getting in the water, even if you have no experience at all. Just come to the beach.”