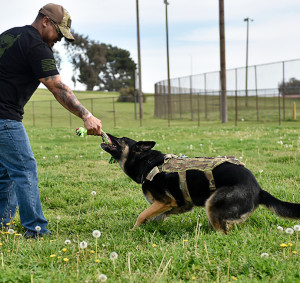 Retired Tech. Sgt. Brandon Jones and his service dog, Apache, play a friendly game of tug-of-war at Travis Air Force Base, Calif., March 30, 2018. Jones served 11 years in the Air Force until he was medically retired due to post-traumatic stress disorder. He credits his service dog, Apache, for saving his life. Apache is trained to alert him during PTSD triggers and helps him ease through those anxieties.

What if you are screaming for help, but no one can hear you? What if your life starts to crumble? Do you know where to turn or what options are available to veterans and service members?

These are the kinds of questions retired Tech. Sgt. Brandon Jones felt as he reached a breaking point in his military career and decided it was time to reach out to military agencies to get the help he desperately needed.

Growing up in Fayetteville, Ga., Jones reminisced on his childhood days and his love for airplanes.

“My dad would take me to the store and ask what I wanted for my birthday,” Jones said. “I would always pick an airplane. I just loved them so much.”

His love for airplanes is what brought him into the Air Force where he honorably served for 11 years until he was medically retired due to post-traumatic stress disorder.

The National Center for PTSD at the U.S. Department of Veterans Affairs describes PTSD as a mental health problem that some people develop after experiencing or witnessing a life-threatening event.

“The level of stress that the combat tours bring takes a toll on you mentally, physically and psychologically,” he said. “It was hard to come home and adjust.”

Jones said he found himself coming home and being angry all the time. All he wanted was to be left alone.

“I’d often have nightmares and flashbacks about my comrades that didn’t get to come home with me,” Jones said. “I’d feel guilty, and I kept asking myself what I could have done differently?”

After years of silence, he decided it was time to seek help. He reached out to the local chaplain and visited the mental health office.

“I desperately needed help,” he said. “I was figuratively drowning and I needed a helping hand.”

While searching online for answers or others who might be going through the same problems, Jones found the link to a website for service dogs. He reached out to Carol Borden, founder and executive director of Guardian Angels Medical Service Dogs in Williston, Fla., hoping he could find the answer he had been looking for.

Individually-trained medical service dogs can be obtained through non-profit organizations such as Guardian Angels, Freedom Service Dogs, K9s For Warriors and many other organizations who rescue, raise, train and then donate these service dogs to veterans.

After reviewing his application, Borden decided he was the right candidate to receive a service dog.

“I want to make it possible for people like Brandon to get the help they need through our amazing dogs,” Borden said. “We custom train each one of our dogs to mitigate the challenges that someone might be having.”

Jones visited the dog farm weekly while waiting to be paired with the right service dog. He needed a service dog that could alert him during PTSD triggers and help him ease through those anxieties.

“Never did I think that I would have a dog that would help me get back to a stable life,” Jones said. “If I’m having nightmares, he will literally come and lick me until I wake up. When he senses an anxiety attack, he will put himself on me and he will force me to pet him.”

Jones credits his service dog, Apache, for saving his life.

Jones urges others who may be going through a similar situation to reach out to military agencies that can help them get PTSD treatment. “If one option doesn’t work, there is always something else available,” he said. “For me, the answer was getting a service dog. But every person heals differently, find what works for you and know there is light at the end of the tunnel.”

Overcoming the shadow of death: An Airman’s fight against depression