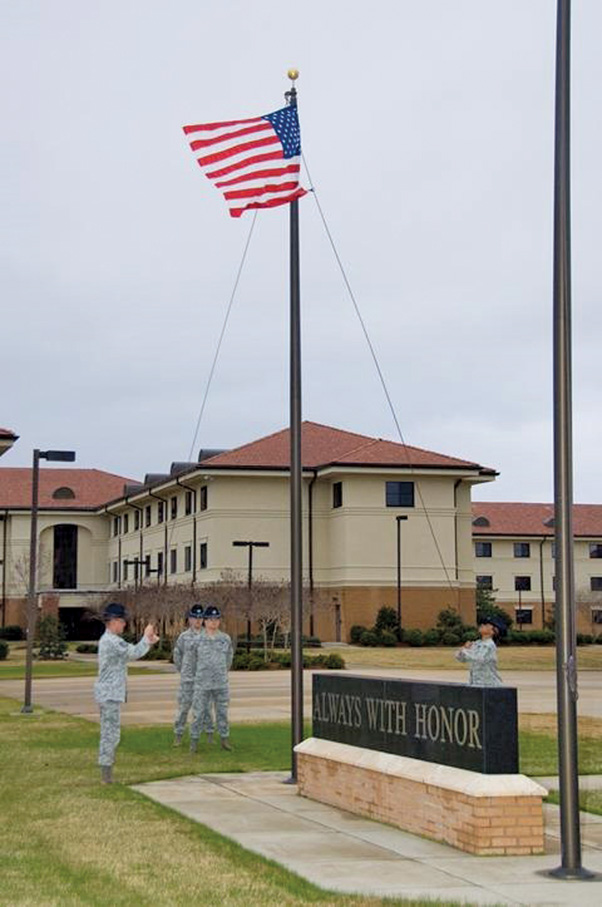 January 2015 marks the beginning of a new era for Air Force officer training as candidates from all three service components, active duty, the Reserves and the Guard, will begin training side by side. The Air Force began transitioning to a combined basic officer training school last fall with new curricula and partially integrated classroom training.

Captain Jason Gonzalez, formerly an officer at the 162nd Wing, recently joined the ranks of AMS instructors to mold officer candidates into the professional military leaders of today. Gonzalez began his four-year instructor tour at AMS in June, and has witnessed first-hand the gradual merger of Officer Training School and AMS.

The new curriculum was designed to synchronize officer training between the separate Air Force components, and was derived from the, “more aggressive 6-week course available through the Academy of Military Science,” said Gonzalez, “which speaks volumes for the AMS curriculum.”

Basic Military Training is a joint service component school, said Gonzalez, and it’s necessary for basic officer training to be as well–for the camaraderie amongst the service components and for information sharing that can benefit each individual and their future leadership actions within their service component.

Estrada’s class had limited interaction with active duty and reserve component candidates, but he feels the future integrated school will be beneficial to all the service components. Estrada hopes the joint school will break-down the ‘weekend warrior’ stigma, and reinforce the importance of regulations and military bearing amongst guard members.

The combined basic officer training course will allow trainees to be, “more well-rounded in their experience with the various military components,” said Gonzalez.

Gonzalez is one of the AMS instructors to take part in the first integrated class of OTS and AMS cadets beginning January 2015.

“I’m proud that our unit is part of teaching the future officers of the Air National Guard, and other service components,” said Estrada.

Although Gonzalez and Estrada did not know one another prior to Estrada’s attendance at AMS, and strict fraternization rules governed their interaction during, a bond was formed through their shared home unit and love of Sonoran hot dogs.

“It’s a good feeling to know that this individual is going to return to our unit and do great things,” said Gonzalez.