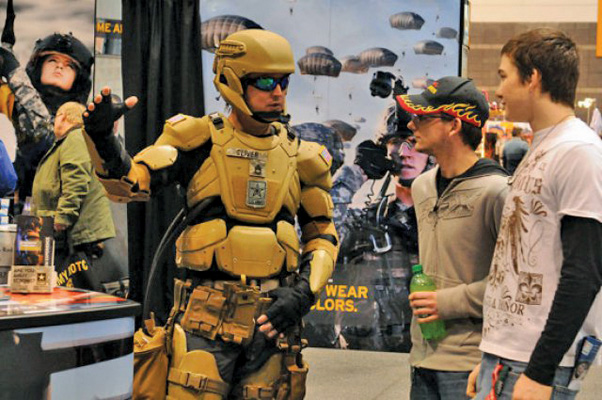 The Tactical Assault Light Operators Suit is cool, too. But it is real and may soon be protecting America’s special operations forces going into harm’s way.

The joint acquisition task force for the suit was established in November 2013 and is banking on breakthrough technology — or technologies — to protect special operators, Votel said. Socom, he said, has put together an unprecedented group from industry, academia and government to develop the prototype.

And Votel says they are on the mark.

“Although many significant challenges remain, our goal for a Mark 5 prototype suit by 2018 is on track right now,” he said.

Future prototype suits have exoskeletons that augment the power of the operators, Votel explained. They will also feature helmets with heads-up display technology. Other future prototypes will feature cooling/heating systems and medical sensors to monitor an operator’s vital signs.

“It’s a holistic system with open systems architecture, so if a new technology rises we can swap it in,” said a joint task force member speaking on background during a recent interview at Socom at MacDill Air Force Base, Florida. “Survivability is our number-one tenet. We have to look not only at the integration of current systems for personal protective equipment, but also to augment the guy’s motion.”

This is serious science with risks and serious trade-offs, and the task force’s main effort this year was to “get as many smart people working on it as possible,” the task force member said.

A rapid prototyping event was held in Tampa from April to June 2014. “The idea of the event was to bring industry , Interagency [and] academia together with special operators to accelerate the development of the technology and accelerate the brainstorming of the ideas for the suit and the project,” said a task force member.

More than 200 people from a wide range of disciplines answered the open call. “Putting those people in one room enabled cross polinization and an incredible collaborative teamwork atmosphere,” the task force member said.

But the rapid prototyping event was more than simply charting the way ahead of theorizing on how the various parts would fit together, the task force member said. There were 3D computer modeling designers participating, he added.

“People could explore concepts by seeing what it would look like, how it would fit, how it would affect other aspects of the design,” an engineer said. “Usually in [Defense Department] contracting you don’t get that kind of immediate feedback. We could actually have a physical model of what we were thinking about.”

The team went from cutting designs from foam to sculpting it from clay to 3D printing the prototypes. “We were able to try a group of different ideas with the experts in the room,” a task force member said.

Going into the rapid prototyping event, the task force members had ideas of what the problems were going to be and the event confirmed them. “It also pointed to ways we can surmount those challenges and pointed out challenges we really didn’t think would be that tough,” the engineer of the group said.

An untethered power source is going to be a problem, officials said. The power will be needed to operate the exoskeleton, cool or heat the operator and fuel all the sensors in the suit. “Identifying an untethered power source for extended duration is one leap of technology,” one official said. “It’s something that doesn’t exist in that man-portable size technology. If someone has an arc reactor in their basement, I know how they can make a lot of money.”

The task force is looking at novel materials and materials used in different configurations. “If you could make armor that was super, super light and is a leap in technology, that buys down some of our other problems,” an official said. “We wouldn’t need as much power, for example.

“We’re looking to get those leaps of technologies,” he continued. “Those leaps of capabilities to the guys so they can do their jobs better than they do now.”

Another challenge is with the suit’s sensors, officials said. One problem deals with latency — the time between when a sensor detects something and when it is transmitted to the brain. Night-vision goggles are immediate — there is zero-difference from when the sensor picks it up and it hits the eye.

Today, even the best prototype sensor solution still creates nausea after being under it for 30 minutes.

The task force never forgets they are developing this suit for real people, for comrades in arms, and they have constant interaction with operators, officials said. “The last thing you want to do is build a suit that nobody wants to get inside,” said one task force member.

The task force has given various pieces of technology to operators to test. Recently, operators tested various heads-up displays. They also had user assessment of the first-year exoskeletons. “We had operators from all components strap them on and run through an obstacle course,” one task force member said. “We also did functional movement tests. It gives the operators the chance to come and tell us what they liked and disliked about the prototypes.”

TALOS has a number of civilian uses as well, officials said. Firefighters may find the initial prototype passive load bearing exoskeleton suits handy, as would other people working in extreme environments. The results of tests will be seen not only in the special operations community, but in improved ballistic protection for all service members.

On the wall of the task force building is a countdown calendar. The day of the interview, the number read 877 — the days left before the Mark 5 first prototype suit must be ready for testing.

“We know why we’re doing this,” one member of the task force said. “This is life-saving technology. There are challenges, but the juice is definitely worth the squeeze.”