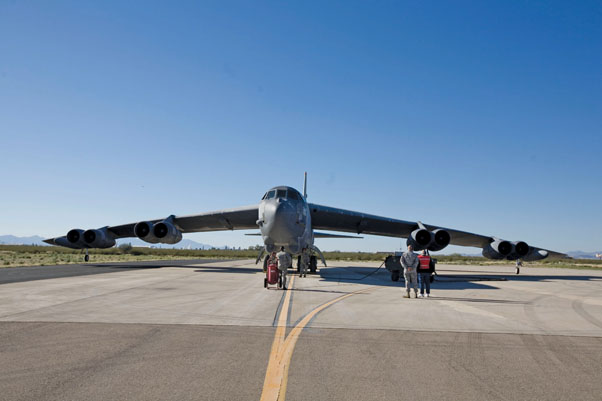 Barksdale Air Force Base, La.  — After almost seven years of slumber, a sleeping giant awakened in the Arizona desert. It prepared to take flight Friday the 13th from Davis-Monthan Air Force Base, on a historic journey to resume the mission for which it was created; provide strategic long-range bomber support anywhere in the world, at any time.

Emerging from the crowd that gathered to watch the historic event was Mr. Jerry Fugere, an 80 year old veteran, native of Tucson and an aspiring 309th Aerospace Maintenance and Regeneration Group (AMARG) tour guide of the notorious Boneyard. Fugere’s connection with this B-52 Stratofortress called “Ghost Rider” began in 1962 at Homestead AFB, Fla., when he accepted the jet as a young crew chief. It arrived straight from the Boeing assembly line with just 17 flying hours on it. He became its first crew chief.

“Every time I came on base, I would see her sitting out in the field and she would bring back a swell of fond memories,” said Fugere. “Then one day, I looked out there and she was gone.” AMARG has been maintaining the aircraft in 1000-type storage, which is the most preserved level of aircraft storage. In late 2014, little did he know that the B-52 had been towed to a spot on the flight line to start the regeneration process that would bring his old friend back to life.

“It was chosen after thorough inspections and extensive engineering analysis,” said Capt. Chuck McLeod, the B-52 System Project Office team lead. Although well preserved, the blazing hot Arizona sun took its toll on the dormant aircraft bleaching sections of its exposed aluminum skin almost white, and causing the tires and major fuel lines to dry rot.

According to Tech. Sgt. Stephen Sorge, a fuels specialist from the 307th Maintenance Squadron, the most challenging part of this project was replacing all the fuel bladders and lines but we had a safe and successful run of all eight engines the end of January.

“Our first engine start was a sight to see,” said Staff Sgt. Matthew Cocran, 2nd Aircraft Maintenance Squadron crew chief. “Out of the exhaust came a black cloud of smoke, then a huge flame as it roared to life.”

The first taxi of Ghost Rider down the runway occurred on the day prior to its scheduled flight to Barksdale AFB, La., and was a critical test of the steering capability of the landing gear. They needed to ensure that after years sitting idle in the desert, the aircraft could be safely controlled down the runway.

Friday the 13th arrived with all of the eyes fixed on the runway.  All that could be heard was the sound of Ghost Rider’s eight engines powering up.  Fugere, wearing a bright orange marshaling vest, was given the honor of directing her from her parking spot to the taxiway.

“Everyone in our group agreed Mr. Fugere should be given the honor once again to marshal his jet into history,” said 307th Maintenance Project Lead, Senior Master Sgt. Gavin Smith. She rumbled down the runway and took to the sky as if the years of a stagnant life in the Arizona desert had never happened. Surprisingly, instead of an air of celebration, the mood was somber as Ghost Rider climbed into the sky and disappeared out of sight. Smith pulled out his phone, and made the call everyone had been waiting to hear, “Aircraft 61-007 is airborne.” Because this had never been done before, the Air Force Global Strike Command projected it would take 90 days to regenerate the B-52. This total force team did it in a little over 70.

The experienced flight crew was carefully picked to ensure they were well prepared to handle any adversity on the flight back to Barksdale.  Upon landing the crew was greeted by a group of excited Airmen to welcome Ghost Rider home to the Barksdale Flightline.

“I’ve been flying the B-52s since the 80s and it surprised me that after almost seven years…she cranked up just fine and we had no issues with the flight control systems. It took a little under three hours for the flight and we were fortunate to have had good weather the entire trip as the inertial and navigational equipment had not been installed.” said the pilot Col. Keith Schultz, 307th Operations Group commander and the most experienced  B-52 pilot still flying in the Air Force with over 6,500 hours. “This aircraft has made it through Jerry Fugere’s career, through the twilight of my career and it could very well perform through these young maintainer’s careers who once again brought her back to life.”

AF culture, standards now in the palm of your hand