While many Airmen from D-M were finishing up their day, some Pararescuemen were beginning theirs, on the evening of April 14.

“This mass casualty (exercise) was different simply because of the complexity of each scenario and the total number of patients,” said Staff Sgt. Blake, 48th RQS Pararescueman and a team element leader.

This type of exercise was not one the unit usually practices. The unit combined two rescue teams who were tasked with two missions back-to-back, instead of a single mission. The unit also incorporated the use of realistic helicopters and conex, used as buildings, which gave them the ability to create the effect of a collapsed building.

The initial challenge the Airmen faced during this exercise was to respond to two downed helicopters with casualties. Upon arriving on the crash site, the team came under brief enemy fire. After eliminating the enemy, the Airmen split into two groups to provide attention and care to both downed aircraft. Once the team was able to remove the patients from the crash sites, they then provided initial medical treatment and radioed in two HH-60 Pavehawks from the 55th RQS to provide casualty extrication.

“This was a unique training mission,” Blake said. “I haven’t experienced anything this complex since becoming a PJ.”

The team then shifted to a follow-on mission where they separated again.  The first group focused on a 6-story collapsed structure where the PJs gained access through the roof. The few team members who entered the structure had to remove all their gear due to the confined space,. Once inside, they searched, located and removed casualties through small windows and lowered them off the roof.

Simultaneously, the second group handled a 5-vehicle site that was the result of vehicle-borne improvised explosive devices. The Airmen had to work through the vehicles, collecting the patients. They also had to dismember a vehicle to recuse four casualties from a mine-resistant, ambush protected vehicle. By the end of the 6-hour exercise, the team had successfully recovered 42 patients.

“Everyone received experience working as a team in a mass casualty (scenario by) performing a number of (Pararescue) skills that are crucial to be able to execute downrange,” Blake said. 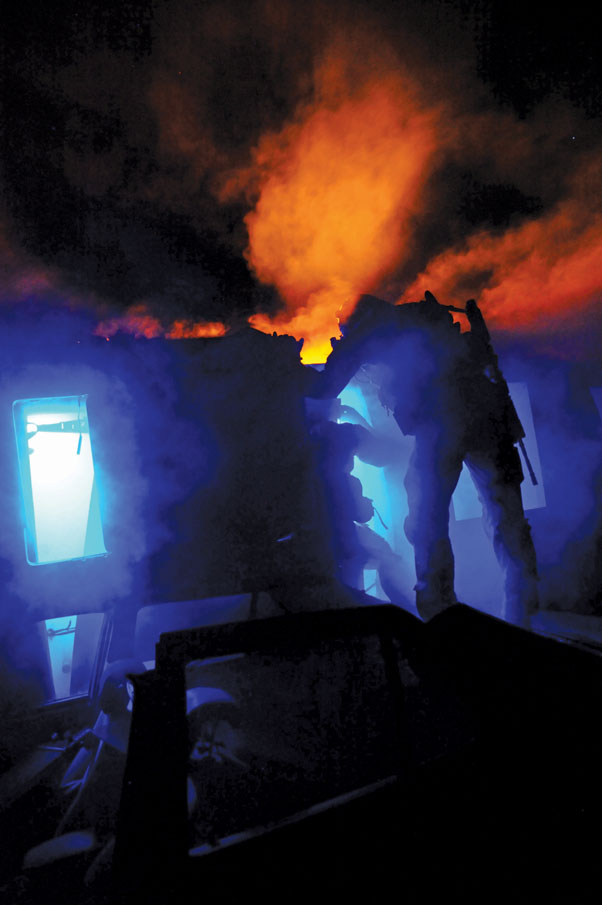 Pararescuemen, 48th Rescue Squadron, enter a simulated downed helicopter during a pre-deployment training exercise. The Airmen were evaluated on how their response to mass casualty situations, including their ability to call in air support for casualty evacuation.