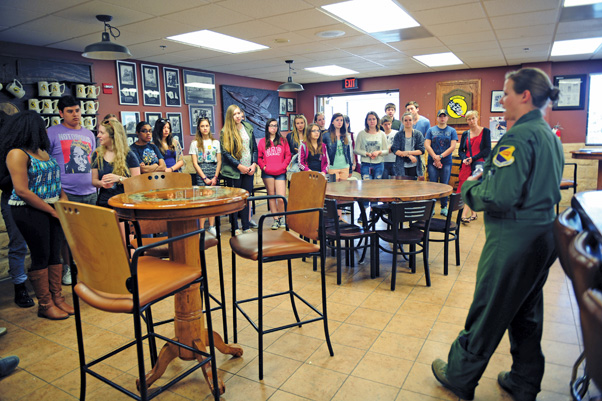 Air Force 1st Lt. Nikki Yogi, 355 Training Squadron A-10C Thunderbolt II student pilot, speaks to a group of students at Davis-Monthan Air Force Base, April 23. Yogi prepared students from Buena Vista High school and cultural exchange students from Dresden Germany for a tour of the 357th Fighter Squadron where they were educated on the mission of the A-10.

The 30 students went to three units learning about the Air Force and the missions here in a hands-on environment.

“The biggest take away and message I wanted to impart was how the United States Air Force integrates and relies on our Combined and Joint partners,” Hines said. “Specifically for the students, I wanted to make sure that they continue to keep an open mind about their futures and hopefully I was able to inspire or spark an interest in not just military careers but science and technology in general.”

After learning about the rescue mission the students were able to visit the 357th Fighter squadron where they were educated on the A-10C Thunderbolt II. They watched a video that displayed the A-10’s capabilities and then were able to sit in the aircraft.

“I felt overwhelmed by the amount of knowledge pilots need to know in order to fly but the experience was eye opening and very interesting,” said Sam Finney, Sierra Vista Unified School District student.

To conclude the base visit, the students went up into the air traffic control tower.

“The students enjoyed themselves very much,” said Randi Buros, Sierra Vista Sister Cities Commission member. “Especially getting to see the inside of an Air Force base to see some of the equipment and get up close with experts to explain it.”