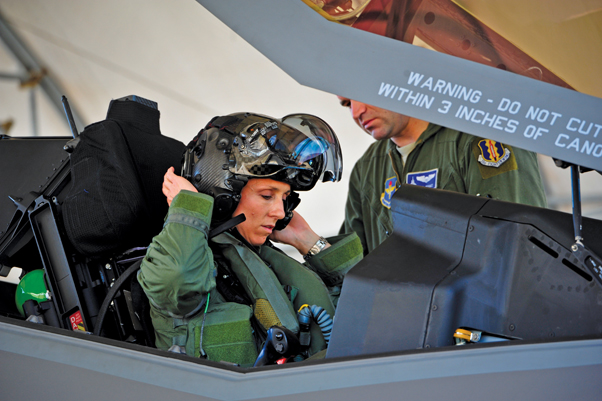 Lt. Col. Christine Mau, 33rd Operations Group deputy commander, puts on her helmet before taking her first flight in the F-35A on Eglin Air Force Base, Fla., May 5, 2015. Mau, who previously flew F-15E Strike Eagles, made history as the first female F-35 pilot in the program.

“It wasn’t until I was taxiing to the runway that it really struck me that I was on my own in the jet,” said Mau, formerly an F-15E Strike Eagle pilot. “I had a chase aircraft, but there was no weapons system officer or instructor pilot sitting behind me, and no one in my ear like in simulators.”

And with that, like the other 87 F-35A pilots trained over the last four years at Eglin, Mau thundered down the runway and was airborne as the first woman in the Air Force’s premier fighter.

“It felt great to get airborne. The jet flies like a dream, and seeing the systems interact is impressive. Flying with the Helmet Mounted Display takes some adjusting, but it’s an easy adjustment,” said Mau. “The training missions in the simulator prepare you very well, so you’re ready for that flight.”

The initial flight in the F-35 training syllabus is designed to orient pilots with the physical aspects of flying the F-35 compared to other fighters they’ve flown previously, such as the F-15E Strike Eagle, F-15C Eagle, F-16 Falcon, A-10 Warthog or F-22 Raptor.

Women have served in combat aviation roles in those and other aircraft for more than 20 years.

Mau acknowledged that although she may be the first female in the F-35 program, her gender has no bearing on her performance as a fighter pilot.

Mau joked that the only difference between her and her fellow F-35 pilots is the size of her G-suit and facemask.

They are both extra-small.

“Flying is a great equalizer,” said Mau. “The plane doesn’t know or care about your gender as a pilot, nor do the ground troops who need your support. You just have to perform. That’s all anyone cares about when you’re up there – that you can do your job, and that you do it exceptionally well.”

Mau’s combat experience and technical prowess in the cockpit were the primary draws for her selection to her position with the 33rd Operations Group.

“Lt. Col. Mau brings a valuable level of combat and operational knowledge to our team,” said Col. Todd Canterbury, 33rd Fighter Wing commander. “We’re nearly a year out from declaring Initial Operational Capability with the F-35. We need battle-tested pilots to help us put the F-35A through its paces and ensure we have a trained and ready force of F-35 pilots to feed into our combat air forces.”

Canterbury witnessed Mau’s leadership and combat effectiveness first-hand when they were both deployed to Afghanistan in 2011, where she was part of another important milestone for women in the combat aviation community.

While with the 389th Expeditionary Fighter Squadron, Mau was part of the first all-female combat sortie. The combat mission provided air support to coalition and Afghan forces in the Kunar Valley, Afghanistan. From the pilots and weapons system officers of the two F-15E jets to the mission planners and maintainers, the entire mission was carried out entirely by women.

“As a service, we need to attract the most innovative and skillful Airmen possible for one reason – it makes us more effective,” said Canterbury. “The broader the net that we cast into the talent pool, coupled with a laser focus on performance, ensures we have the best Airmen in place to carry out the mission. Performance is key, and it’s the standard we hold all of our Airmen to in the Air Force,” said Canterbury.