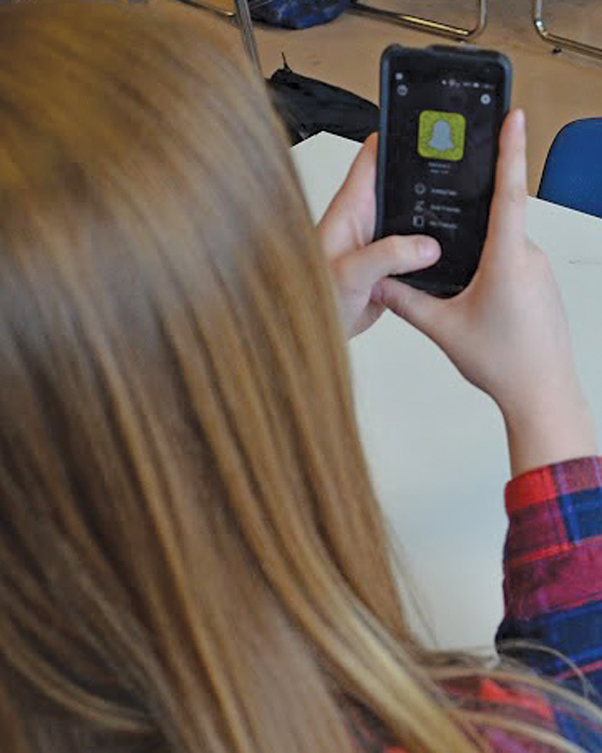 Teenagers may feel a false sense of anonymity and security when using Internet apps, which can lead to an increasing number of teenagers sending inappropriate content. Irresponsible sharing of pictures or other content could lead to damaged reputations and self-esteems, the attention of online predators, or jail time for the possession of child pornography.

RAMSTEIN AIR BASE, Germany (AFNS) — There is a conversation many teenagers have had with their parents or friends, me included.

“Hey, don’t worry! It’ll be fine; all of the pictures I send disappear after ten seconds. That’s how Snapchat works.”

While many teenagers only share their silly, cross-eyed, quadruple-chinned faces with friends, there are a growing number of teenagers sending inappropriate content that “will disappear.”

High school students all feel a certain level of anonymity or safeness that does not exist while using the Internet and apps like Tinder, Omegle, Chat Roulette, Instagram, and Snapchat. Unfortunately, it is incredibly simple for the receiver to take advantage of the sent content, and through the picture may disappear after 10 seconds, it can actually last a lot longer than that. While these apps can easily be used inappropriately, the apps themselves are not bad, but should just be used responsibly.

It is easy to protect yourself from online predators, but it is rarely done. The most effective way to keep information secure is to lock any social media accounts and turn all privacy settings on. Many people spend their time clicking on pictures and profiles but it is impossible to know who is viewing your profile. It could be a friend from school or it could very easily be an online predator. Before friending or accepting anyone’s follow request, it is necessary to actually know who they are. Social media is a great tool for keeping in touch with friends, new or old, and family members, but it is important to use caution and be responsible.

I have many friends that pride themselves on the fact they have over one, two, or ten thousand followers. This is a dangerous because it is impossible to be safe with so many unknown people seeing so much of their lives.

That behavior and feeling of invincibility starts early. I remember during middle school that Omegle was the next best thing on the Internet. At sleepovers or on a Saturday afternoons, young girls and boys would sit around a laptop and pretend to be whomever they thought of, giving off silly answers and laughing at the accents they pretended their user to have. However, we all knew that unless you wanted to see the “gross stuff” you had to turn the camera off. Many of us have since moved on from this fear and feel that sending pornographic content over apps is okay.

This attitude towards sharing everything on the Internet has also lead to unfortunate, yet completely avoidable situations. Why do so many teenagers participate in an activity that can have so many bad repercussions?

Teenage girls reported to Dosomething.org and the National Campaign to Prevent Teen Pregnancy that there are three major reasons for their sending of nude photos: as a joke, to feel sexy, or because of peer pressures.

Sending inappropriate photos is not a joke nor will it boost a person’s confidence. While it may be a thrill at first, the psychological damage could deteriorate a girl’s or boy’s self-esteem. Peer pressure is a horrible, but a real-life thing. Everyone experiences peer pressure at some point or another in his or her lifetime, but your body, whether you are male or female, is yours.

For teenagers, Snapchat is the most common app where pictures are shared. Snapchat is available for anyone, regardless of age and it is based on the idea of pictures disappearing forever after 10 seconds. Despite this, it is easy to either screenshot the picture or use a third-party app that will save the picture automatically for you. These pictures can be used against the sender at the receiver’s convenience.

Even two people that have a trusting relationship should not partake in this kind of activity for two reasons: First, it could be considered illegal. Second, it can easily be shared or shown to others that were not the intended audience.

According to Dosomething.org, 17 percent of “sexters” share the messages they receive with others, and 55 percent of those share them with more than one person. Everyone wants to believe that their friends would never betray them, but we have all seen the stories of a girl’s pictures being spread around school as a prank or because she made someone mad. These situations are so damaging to a person’s confidence and reputation. It is common to think that someone in a close circle is not going to end up like those girls or boys, but it can easily happen to anyone with just the click of a button.

The number of people sharing inappropriate pictures is increasing. Sources say that 1 in 5 teenagers are sharing provocative photos, but it may be even scarier that the senders are getting younger. It is hard to imagine that 7th and 8th grade students are sending such mature content, but it is happening.

I have a younger sister and I believe that it is my job to warn her and educate on her on the dangers of sexting and online predators. Everyone in high school should be doing this as well. Do not encourage it by talking about how much fun and how safe it is in the locker room. Do not make it seem okay to these young, impressionable girls and boys. Do not be afraid to stand up against pressures of sending inappropriate photos across the Internet.