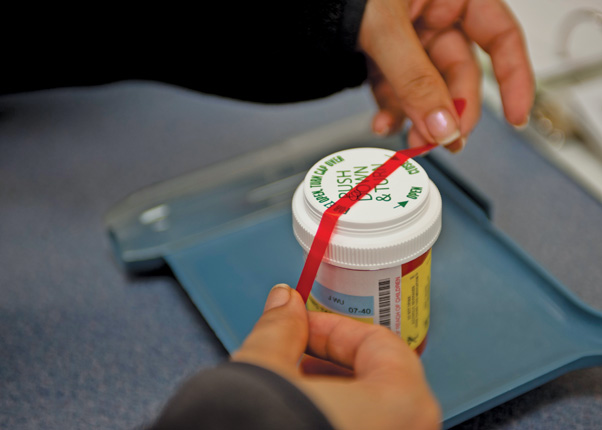 WASHINGTON – In the face of recent aggressive and deceptive marketing practices of some compounding pharmacies targeting TRICARE, the Defense Health Agency is taking aggressive action to help TRICARE beneficiaries, DHA’s chief of pharmacy operations said in a recent interview.

Dr. George Jones described compounding as a way that some pharmacies prepare medications for patients who need different kinds or strengths of medications than are available in commercially available products.

“Pediatrics, for example, is a big area for compounding, where [infants or toddlers] may not be able to take tablets or capsules or need a particular strength, so a compounding pharmacy … can make exactly what that patient needs,” Jones told DoD News this week.

Some pharmacies have the expertise and equipment to compound medications and others specialize only in compounding, the clinical pharmacist added. Specialty compounding pharmacies create creams, ointments, capsules and liquids to make specific products and doses.

But a phenomenon that’s arisen over the past five or six months involves compounding pharmacies “that are charging unsupportable costs for some of these products, and expanding into areas where there is not good evidence to support the products’ safety,” he added.

The normal compounding process begins when a doctor writes a prescription for a compounded product for a patient — in this case a TRICARE beneficiary.

The patient takes the prescription to a compounding pharmacy, which then makes the product and bills TRICARE for the medicine, typically using the average wholesale prices of the medications they use in the compounded product.

Now, Jones said, a new breed of compounding pharmacy is distorting some of the elements of this traditional process.

Some compound pharmacies are using aggressive outreach programs to target TRICARE beneficiaries and collect their personal information. Once they have the information, they use it to bill TRICARE as high as $15,000 for a single compound prescription. These prescriptions may not be tailored to the beneficiary’s needs, and sometimes the beneficiary never even meets or speaks to a doctor before the pharmacy sends them the drug. Not only that, but often there is little or no evidence that these products are safe or effective, Jones said.

Such aggressive pharmacies “put these combinations [of ingredients] together and then put them on the market. They’re supposed to be on a prescription for an individual patient, but it seems nowadays they’re trying to do a one-size-fits-all with a lot of pain and scar creams,” Jones said.

The pharmacies combine ingredients, he added, “where you think they might work but there’s no study, no evidence, nobody has looked carefully” to make sure it will not do harm and that it will benefit the patient.”

Some pharmacies reach out to beneficiaries, calling them and requesting personal information to use to create prescriptions, Jones said.

Using aggressive marketing efforts, pharmacies are trying to give compounding creams away, almost like door prizes, he added.

“There’s a lot of internet and social media use as well as trucks advertising free lunches out in front of bases,” Jones explained. “They say, come and get a free lunch, and then they get people to sign up for some of these compounds whether they really need them or not … and then really raise the prices when they sell them.”

Several websites have been created to look like TRICARE websites, Jones said, “they look like something for you as a TRICARE beneficiary but they’re not. They suck you in and get your information and then start sending you these prescriptions and billing the government.”

Patients are being exploited with these marketing efforts, he said, so beneficiaries should be very careful if someone calls asking for patient information, social security number or TRICARE number.

“TRICARE will almost never call you and ask you for personal information, so if someone does and tells you they’re going to give you a prescription, be very wary of that kind of call,” he added.

Jones said that on May 1 TRICARE began extra screening of compound prescriptions to “look at the ingredients to see if there’s evidence of safety, to see if it’s something that can be marketed in the United States, to make sure it’s in the best interest of that patient and that it’s cost effective,” Jones said.

TRICARE has been monitoring compound activity for the past couple of years, Jones said, but only over the last four or five months has the aggressive marketing outreach and exorbitant prices become a factor.

The commercial insurance industry has been a little faster to begin restricting the compounds, Jones said, “but we have been careful to be sure that we don’t create problems for those who need legitimate compounds and compound prescriptions.”

For the last six months, Jones said DHA has been working to make beneficiaries aware of some of the nefarious practices and outreach efforts being made to try to get their personal health information and scam the government.

“There are a lot of tools available on the TRICARE.mil and health.mil websites. There’s also a fraud line if you get one of these calls or you run across someone who’s trying to give you a free lunch or something for nothing,” he said.

Jones said that when beneficiaries call, DHA follows up to see if the situation is legitimate or if they should turn it over to investigators.

“TRICARE sent around 30,000 letters to patients who receive compounds to let them know that we were starting a new screening process, but [told them] if theirs was a legitimate compound they needed, it should go through with no problem,” Jones said, adding that the letter let patients know what to do if they had questions.

Jones said that very preliminary data for May indicate that this screening is having an impact. DHA will continue to closely monitor and assess the effects of these new policies.

“It will be an ongoing process,” Jones said, “and we’ll continue to make adjustments to ensure that we can provide access to legitimate compounds and still be good stewards of taxpayer dollars, and do what we can to help protect patients from some of these bad actors.”