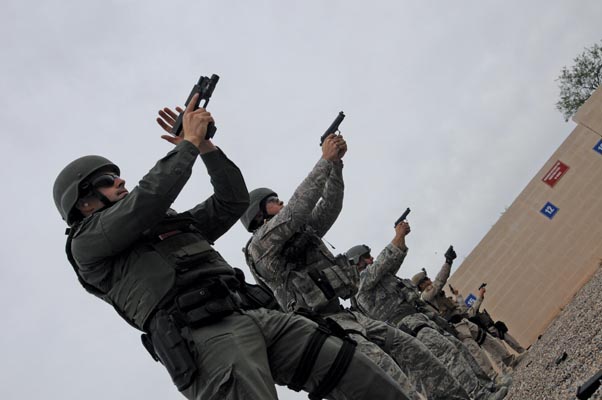 Airmen of the 162nd Wing and local law enforcement personnel participated in an annual SWAT training course in Tucson. Tech. Sgt. Sam Alanis and Staff Sgt. Louis Duran from the Security Forces Squadron experienced what it takes to be a part of the Pima Regional SWAT team.

The SWAT training program provides local law enforcement with the necessary knowledge and skills to one day become part of the Pima Regional SWAT team.

During the first two weeks of training, law enforcement personnel learn to use firearms while wearing SWAT equipment, learn about the legal aspects of SWAT and various missions.  The last week of training includes hostage rescue scenarios, vehicle assaults, barricaded subjects, grappling as well as other challenging tasks.

They were tested on their ability to think clearly and judge a situation as quickly as possible.  A hostage scenario is unpredictable and the Airmen experienced this situation for the first time.

“The very high tempo keeps you on your toes and keeps you thinking at all times,” said Duran.  “I definitely have to think outside of the box to determine my best options for dealing with a potentially deadly situation.”

The SWAT course provides the basics of what it takes to become a team member.  The course is designed as an introduction to and is the first step to becoming part of the Pima Regional SWAT team.

“It’s a lengthy and rigorous process to become a part of this team,” said SWAT training instructor Sgt. Michael Canizales who has ten years of experience. “I hope that I can teach as well as I have been taught and I hope that I can forward everything that I’ve learned to the new people coming through.”

To become part of a SWAT team takes a minimum of three years of on the job experience along with tests of physical endurance, shooting ability, several scenarios and an oral board.

Duran says that the training he received is a great asset for the 162nd Wing.  He now possesses the ability to quickly assess a life or death situation and plans on sharing that knowledge with other members of security forces.

“We evaluate individuals on every mission the SWAT team performs,” said Pima Regional Swat Supervisor Sgt. Gary Stengel.  “The most important aspect of this training is for everyone to be able to use the skills they’ve learned in their law enforcement careers.”