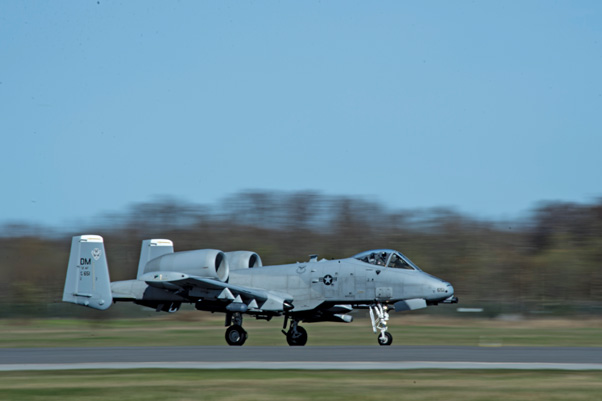 Since the beginning of the year the base has deployed 1,166 Airmen in support of Operation Atlantic Resolve and various other combatant commanders around the world.

The A-10s supporting Operation Atlantic Resolve are fulfilling the Theatre Security Package in Europe. They have focused on close air support and strengthening communication with Joint Terminal Attack Controllers. The Airmen have trained alongside NATO Nations to include Estonia, Czech Republic, Romania, Poland, Slovakia, United Kingdom, and Lithuania.

D-M Airmen have been recognized in Southwest Asia for outstanding performance:

Master Sgt. Ryan Taylor and his emergency management team, from the 355th Civil Engineer Squadron, earned AFCENT Joint Warning and Reporting Network team of the month. Teams across the area of responsibility compete during the monthly competition that tests Airmen’s ability to report, analyze, and disseminate Chemical, Biological, Radiological and Nuclear information.

1st Lieutenant Brent Nichols, Contracting Officer from D-M, assisted RED HORSE in setting up airfields to support the Combatant Commander. Nichols has executed $2.3M in contracts in 2 months as well as rectifying a $4.4M in unpaid vendors. He is also credited with saving $346K.  Nichols contracted repairs for damaged airfield in an undisclosed location. The repairs were critical to allowing larger airframes access to the airfield in order to re-launch offensive effort on a previously shutdown airfield–mission ongoing as Red Horse builds new bed-downs

Airman 1st Class Tinalouise Dunbar, defender from Davis-Monthan Air Force Base, Ariz., was selected by 386th Air ExpeditionaryWing leadership as April’s Unsung Hero Award recipient. Dunbar distinguished herself by protecting the US Speaker of the House, 30 distinguished visitors, six Senators and two British members of Parliament. She liaised with the United States Secret Service guarding 105 vehicles, 215 personnel, 1K pounds of equipment and Air Force assets valued at $121 million. This enabled strategic talks for OPERATION DECISIVE STORM. Additionally, she facilitated the completion of a $165 million tri-service operations, searched and cleared 2.1 tons of cargo and 250 Mine Resistant All-Terrain vehicles. Lastly, she cleared 450 combatants that flew 112 sorties in support of OPERATION INHERENT RESOLVE.