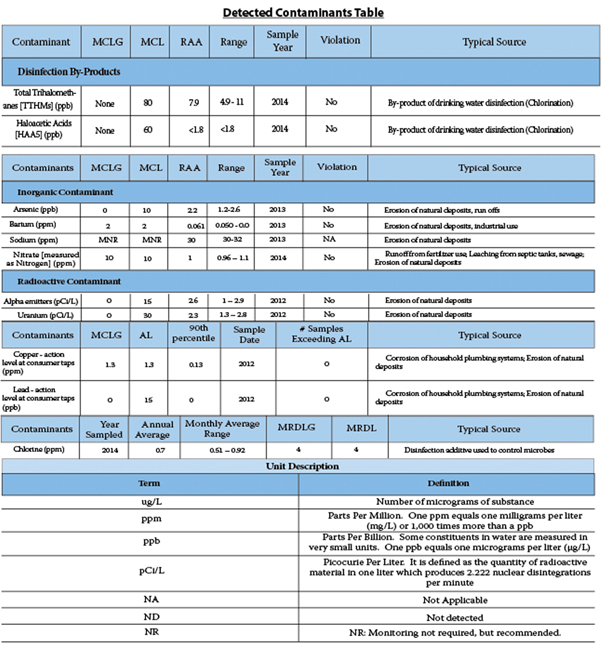 IS MY WATER SAFE?

WHERE DOES MY WATER COME FROM?

Davis-Monthan AFB supplies drinking water to around 13,800 customers/base residents each day. This water is pulled directly from the Fort Lowell Aquifer via eight groundwater wells located throughout the base, and is monitored by personnel from the 355th Fighter Wing.

SOURCE WATER ASSESSMENT AND ITS AVAILABILITY

All drinking water is chlorinated for disinfection purposes. Disinfection involves the addition of chlorine to kill bacteria and microorganisms that may be in the water. On a monthly basis, the Bioenvironmental Engineering Flight monitors the base drinking water to ensure chlorination, acidity, and bacteriological contamination levels fall within an acceptable range. Additional sampling is performed on a periodic basis for other contaminants to ensure our drinking water remains compliant with safety regulations set by the United States Environmental Protection Agency (USEPA).

HOW CAN I GET INVOLVED?

We would like you to understand the efforts we make to continually improve the water treatment process and protect our water resources. If you like additional information concerning this report, or if you have any questions about our drinking water program, please feel free to contact the Davis-Monthan Drinking Water team members and we will be happy to assist you in any way we can.

WHY ARE THERE CONTAMINANTS IN MY DRINKING WATER?

As water travels across the surface of the land or dissolves through the ground, it picks up naturally occurring minerals, and in some cases, naturally occurring radioactive materials. Additionally, it can pick up any number of substances resulting from the presence of animals, or human activity. These range from viruses or bacteria found in water treatment plants and septic systems, inorganic and organic compounds, either naturally occurring or occurring as a result of industrial operations, and chemical contaminants such as pesticides and herbicides from farms. The USEPA sets safety Limits on these contaminants in public water systems in order to ensure safe drinking water is provided to the customer. Drinking water, including bottled water, may reasonably be expected to contain at least small amounts of some contaminants does not necessarily indicate that the water poses a health risk. More information about contaminants and potential health effects can be obtained by calling the Environmental Protection Agency’s (EPA) Safe Drinking Water Hotline (800-426-4791).

DO I NEED TO TAKE SPECIAL PRECAUTIONS?

Some people may be more vulnerable to contaminants in drinking water than the general population. Immuno-compromised persons such as persons with cancer undergoing chemotherapy, persons who have undergone organ transplants, people with HIV/AIDS or other immune system disorders, some elderly, and infants can be particularly at risk from infections. These people should seek advice about drinking water from their health care providers. EPA/Centers for Disease Control (CDC) guidelines on appropriate means to lessen the risk of infection by Cryptosporidium and other microbial contaminants are available from the Safe Drinking Water Hotline (800-426-4791).

WERE THERE ANY MONITORING FAILURES OR VIOLATIONS?

Yes, a reporting violation on Cyanide was issued but this issue has been resolved. Please see next question for further information.

Cyanide is released from natural substances in some foods and in certain plants such as cassava, lima beans and almonds. Cyanide enters water, soil, or air as a result of both natural processes and industrial activities. On October 2012, the 355th Bioenvironmental Engineering Flight (BEF) sampled 4 sampling points for cyanide. Results were forwarded to Arizona Department of Environmental Quality (ADEQ); however, the information was not properly input into their database, resulting in a violation. Though the samples were collected on time and the levels did not exceed the MCL, we are required to inform you of this violation. The issue was resolved in March 2015; and there have not been any other issues with this sampling site.

WERE THERE ANY CONTAMINANTS DETECTED IN MY DRINKING WATER?

All sources of drinking water contain some naturally occurring contaminants. In order to ensure that tap water is safe to drink, the USEPA prescribes regulations which limit the amount of contaminants allowed in water provided by public water systems. At low levels, these substances are generally not harmful in our drinking water. Removing all contaminants would be extremely expensive, and in most cases, would not provide increased protection of public health. The EPA or the State requires us to monitor for certain contaminants less than once per year because the concentrations of these contaminants do not change frequently.

The Water Quality Data table lists all of the drinking water contaminants that we detected.  Unless otherwise noted, the data presented in this table is from testing done within 5 years of the report.  A majority of regulated contaminants that were not detected are not included in the table. Thus, only those substances listed below were found in your water.

Total Trihalomethanes (TTHMs) are formed when chlorine combines with naturally occurring organic material in water.  Since the level of organic matter in our groundwater is extremely low, these compounds are found at very low concentrations.  The compounds which make up the TTHMs include bromodichloromethane, bromoform, chlorodibromomethane, and chloroform.  Compliance with the TTHM standard is based on the running annual average concentration.

Arsenic is a naturally occurring substance commonly found in groundwater in the southwestern United States. While your drinking water meets USEPA’s standard for arsenic, it does contain low levels of arsenic. USEPA’s standard balances the current understanding of arsenic’s possible health effects against the cost of removing arsenic from drinking water. USEPA continues to research the health effect of low levels of arsenic which is a mineral known to cause cancer in humans at high concentrations and is linked to other health effects such as skin damage and circulatory problems.

Barium occurs naturally at very low concentrations in our groundwater.

Nitrate is a form of nitrogen and an important plant nutrient.  Nitrate in drinking water at levels above 10 ppm is a health risk for infants less than six months of age.  High nitrate levels in drinking water can cause blue baby syndrome. Nitrate levels may rise quickly for short periods of time because of rainfall or agricultural activity.  If you are caring for an infant, ask advice from your health care provider.

Sodium is the sixth most abundant element on Earth and is widely distributed in soils, plants, water, and food.  A goal of 2300 mg/day dietary sodium has been proposed by several government and health agencies.  Drinking water containing between 30 and 60 ppm would contribute only 2.5 % to 5% of the dietary goal if tap water consumption is 2 liters per day.  Currently, there is no MCL for sodium in drinking water. The recommended EPA guidance level for individuals on a very low sodium diet (500 mg/day) is 20 ppm in drinking water.  Drinking water does not play a significant role in sodium exposure for most individuals.  Those who are under treatment for sodium-sensitive hypertension should consult with their health care provider regarding sodium levels in their drinking water supply and the advisability of using an alternative water source or point-of-use treatment to reduce the sodium.

Alpha emitters are a measure of radioactivity due to naturally occurring minerals in groundwater.  This excludes the radioactivity contributed by either radon or uranium.

Radium 226 and 228 are two of the most common radium isotopes.  Radium is a naturally occurring radionuclide, formed by the decay of uranium or thorium in the environment.  It occurs at low concentrations in virtually all rock, soil, water, plants, and animals.

Uranium is a metallic element which is highly toxic and radioactive.

Lead and Copper are naturally occurring metals which are generally found at very low levels in source waters.  If present, elevated levels of lead can cause serious health problems, especially for pregnant women and young children.  Lead in drinking water is primarily from materials and components associated with service lines and home plumbing.  The BEF is responsible for providing high quality drinking water, but cannot control the variety of materials used in plumbing components.  If water in your home has been sitting for several hours, you can minimize the potential for lead exposure by flushing your tap for 30 seconds to 2 minutes before using water for drinking or cooking.  If you are concerned about lead in your water, you may wish to have your water tested.  Information on lead in drinking water, testing methods, and steps you can take to minimize exposure is available from the Safe Drinking Water Hotline or at http://www.epa.gov/safewater/lead.

Chlorine Residual Disinfection is maintained throughout the distribution system.  Chlorine is added to the drinking water supply at well sites to provide assurance that water delivered to customers will remain free of microbiological contamination.  This also ensures that the water meets microbiological drinking water standards from the time it is pumped from the ground until it reaches the customer’s tap.  Chlorine Residual Disinfectant is measured five days a week from each well and monthly from the sample stations where the bacteriological samples are collected.  The annual chlorine residual disinfectant is calculated using the monthly chlorine averages for the past 12 months.

Coliform Bacteria are commonly found in the environment and in the digestive tract of animals.  While rarely harmful, coliform bacteria in drinking water are indicators that the water may also contain harmful microorganisms.  In 2014, there were zero positive total coliform samples for the entire year. (The MCL is 1 per month.)

A Trek for Life Thirteen wounded veterans are selected for Raytheon, No Barriers expedition