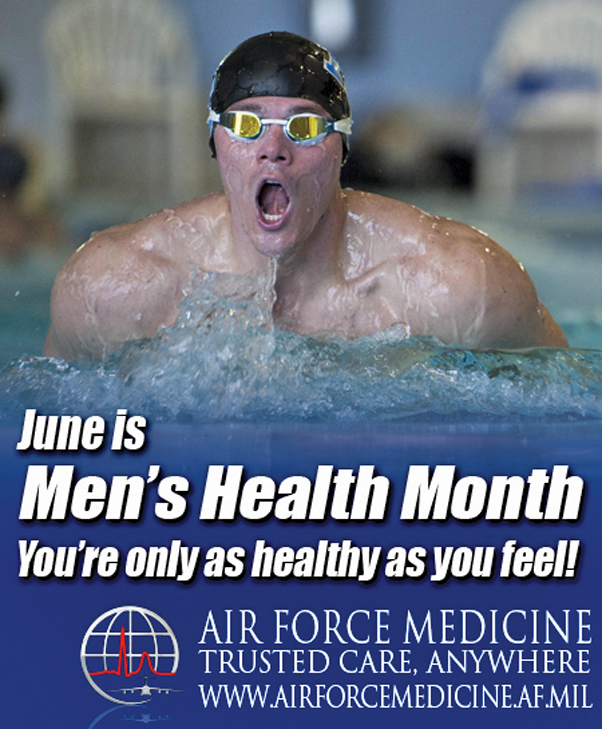 LITTLE ROCK AIR FORCE BASE, Ark. (AFNS) — Each June, a congressional health education program is promoted to heighten the awareness of preventable health problems and encourage early detection and treatment of disease among men and boys.

The increased visibility of Men’s Health Month encourages men and boys to seek regular medical advice and early treatment for disease and injury.

One main problem among males is their reluctance to see medical professionals. According to the Agency for Healthcare Research and Quality, American men are 25 percent less likely than their female counterparts to visit a doctor.

“For whatever reason, men in general just do not go to the doctor as often as women,” said Capt. Amanda Killinger, a 19th Aerospace Medicine Squadron flight surgeon. “Men shouldn’t hesitate to get checked out.”

“Prevention is much easier than treatment,” Killinger continued. “Take prostate cancer as an example, it is treatable, but if a man doesn’t get diagnosed early, things have the potential to get much worse. Routine checkups are vital when it comes to one’s health.”

According to the Center for Disease Control, prostate cancer is the second leading cause of cancer death in American men, after lung cancer.

Along with regular doctor visits, there are multiple other things that men can do in order to prevent disease and stay healthy. Exercise and healthy eating play a key role in developing and maintaining good health. Base fitness centers might provide various classes to can help both men and women get or stay in shape.

Additionally, some base health and wellness centers hold healthy cooking classes and provides nutritious recipes. Eating healthy is a great way to combat heart disease, which is also common in American men.

Being overstressed can also lead to a multitude of health problems. Eating right, exercising and getting sleep is proven to reduce stress. Medical treatment facilities or clinics can offer sleep hygiene and relaxation classes that can help remedy or treat sleep problems.

Smoking can also cause health complications. For those who are interested in quitting, the HAWC often offers smoking cessation classes.

Though June and Men’s Health Month will come to an end, men should remember to focus on their health year round with the goal of living longer and happier lives.

Promoting health, one Airman at a time