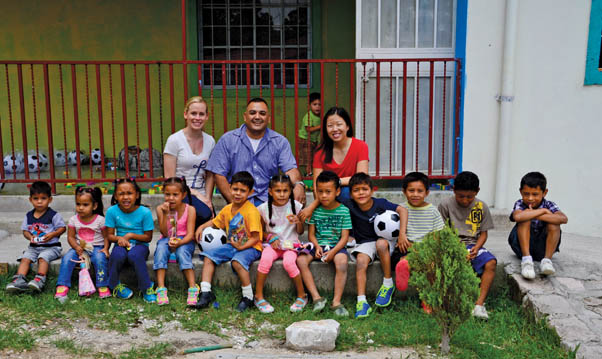 TEGUCIGALPA, Honduras (AFNS) — Up a winding mountain road through the mountains of Honduras, about an hour outside the city of Tegucigalpa, is the town of Casa de Corderitos, a small community of orphaned and neglected children. This is where Airmen from 12th Air Force (Air Forces Southern) decided to spend some of their downtime during a recent visit to various Honduran air bases.

The trip was organized by Master Sgt. Roberto Vasquez, the superintendent of 12th Air Force (AFSOUTH) Plans, Requirements, and Programs section, who was inspired by a common site he encountered when traveling to Central and South America.

“I’ve traveled to Honduras almost 10 times for subject matter expert exchanges, and every time I’m waiting to board my plane, there is a church group also preparing to board,” Vasquez said. “So I thought, why not? The various U.S. military units around Honduras sponsor different orphanages, so why can’t we take some time to visit one.”

The visit to the Casa de Corderitos orphanage was coordinated between Vasquez and Honduran air force Master Sgt. Jose Lopez.

“It is important for us to work with the community,” Vasquez added. “This specific orphanage is a central hub for several different outreach programs helping several communities throughout the Tegucigalpa area.”

According to the program coordinator for Casa de Corderitos, volunteers are always welcomed.

“It is a blessing to have visitors who are interested in what we are trying to accomplish here,” said Mary Elizabeth McCall, the program coordinator for Casa de Corderitos. “We would not have gotten as far as we have if it was not for the support of the public and their donations.”

According to McCall, the escalating gang violence and drug wars are taking a toll on the citizens of Tegucigalpa. Children are often targeted by these gangs and are recruited or threatened to increase the size of the gangs.

“Our goal is to keep the children safe,” McCall said. “Our facilities are designed to protect our children from predatory gang members, so we’ve established several programs to help them focus on their future.”

Some of the programs and services McCall briefed the AFSOUTH members on included providing medical attention and counseling for abused children, establishing safe houses for trafficked girls and establishing youth programs that teach various trades.

“We want our children to know that their past does not define them,” McCall said. “We focus on teaching them to be more than what they learned on the street. So we do anything that we can to keep their minds and bodies as active as we can so they do not dwell on the past.”

During their two-hour visit, AFSOUTH volunteers spent time not only interacting with the children but also delivered bags full of donated toys, soccer balls and candy.

“I’ve never seen an orphanage before, so this was an eye opening experience for me,” said Staff Sgt. Katie Adams, a 12th Air Force (AFSOUTH) Latin American air analyst. “The most impressive part for me, is they don’t deny aid to any child and all of the children look happy and healthy. It’s amazing what they are doing here.”

It’s the AGE of innovation

It’s the AGE of innovation