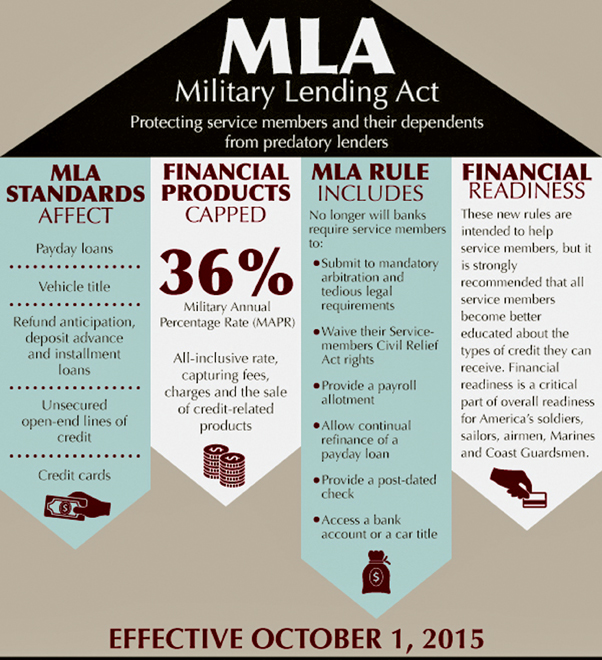 “We’re going to keep fighting to give our troops and veterans a chance to enjoy the American freedom you helped defend,” the president told the veterans.

“There’s already a lot to protect our troops and families against unscrupulous predatory lenders, but some of the worst abusers — like payday lenders — are exploiting loopholes to trap our troops in a vicious cycle of crushing debt,” Obama said.

“It is the right thing to do,” he said of the new rule.

“With this action, the department takes an important stand against companies that can prey on our men and women in uniform,” Deputy Defense Secretary Bob Work said in a news release after the president’s announcement.

“This new rule addresses a range of credit products that previously escaped the scope of the regulation, compromising the financial readiness of our troops. Today, with our regulatory and enforcement partners, we stand united in support of our service members and their families,” he continued.

The revision began with a three-year study by the Defense and Treasury departments, Federal Trade Commission, and financial regulators such as the Federal Deposit Insurance Corp., Federal Reserve Board, Office of the Comptroller of the Currency, Consumer Financial Protection Bureau and the National Credit Union Administration, DoD officials said.

Congress passed the Military Lending Act in 2006 to provide specific protections for active-duty service members and their families in consumer credit transactions.

Among other protections, the law caps at 36 percent the interest rate on covered loans to active-duty service members, requires disclosures to alert service members of their rights, and prohibits creditors from requiring a service member to submit to arbitration in a dispute.

The rule will help protect all active-duty service members and their families from committing to loans with excessive fees and charges.

Service members still will have access to no-interest loans, grants, and scholarships from the four military relief societies, and not all credit products will be affected by the regulation — notably residential mortgages and purchase-money loans to buy cars, for example, which are excluded from the MLA’s definition of consumer credit, officials said.