SHAW AIR FORCE BASE, S.C. — An F-16CM Fighting Falcon shoots into the air, flying at a speed of 400 knots as it is pulled through various maneuvers to demonstrate its capabilities.

Maneuvering the aircraft through inversions, undergoing eight to nine times the force of gravity, and pushing the F-16 to its limits is Capt. Craig “Rocket” Baker, Viper Demo Team pilot.

After almost three years of inactivity, the Air Force recertified the Viper Demo Team and chose Baker to be its sole pilot.

“Craig always wanted to be a fighter pilot,” said Lindsey Baker, Baker’s wife of 10 years. “That, coupled with his desire to serve our country, drives what he does. He puts his all into everything that he is passionate about.”

From a young age, the Air Force Academy alumni had an itch for the thrill to fly.

“It’s what I always wanted to do and I’ve been fortunate enough along the way to have family from when I was a kid all the way through my Air Force career, support me along the way to allow what was a dream to become a reality,” said Baker.

Through the years, Baker, a Gray’s Creek, North Carolina native, sought out the best way to become a pilot in the world’s greatest Air Force.

“I started asking questions because I really wanted to fly,” said Baker. “Most of the pilot slots were given to the Air Force Academy so at that point I set my sights on going there.”

Going to the Academy was fueled a lot by the desire to become a pilot, but it quickly became about being patriotic and serving the country, said Baker.

Baker, the first in his family to join the military, went through three years of vigorous training to become an Air Force pilot including pilot training to obtain his wings, land and combat survival training, the Introduction to Fighter Fundamentals course, and the F-16 Basic Course.

“It was cool but nerve wracking,” said Baker. “Here I was studying my whole life to be a pilot and I’ve never flown before. What if I don’t like it?”

During training pilots are able to list by preference which aircraft they would like to fly, and for Baker it was an easy choice. His top choice, which was also the seat he received, was the F-16 because it is a single seat, single engine, multi-role aircraft that engages in air-to-air and air-to-ground missions and flying that aircraft is highly esteemed in the Air Force.

The Team Shaw pilot, regularly assigned to 79th Fighter Squadron, has been assigned to Shaw Air Force Base, South Carolina, for two years and deployed twice prior to his selection for the Viper Demo Team.

“It’s not the typical flying we do day-to-day here at Shaw,” said Baker. “The demo profile is a crusher for sure.”

Demo pilot’s hearts typically drop approximately four inches while flying aerobatics and because of how Baker sits in the cockpit, the will blood pool in his elbows and his neck will hurt since it is not made to support a head that weighs nine times heavier than it normally does.

To physically prepare for the aerobatics, Baker began participating in triathlons and consistently works out four to five times a week.

“It’s intense,” said Baker. “(Flying aerobatics) is similar to 12 minutes of doing wind sprints with a parachute behind your back. I am pulling eight or nine G’s throughout the entire show. It is physically demanding and exhausting.”

After months of intense training and a 17-ride syllabus, Baker was ready to take to the skies and represent the Air Force in various air shows around the globe.

“Being on the team is very prestigious,” said Master Sgt. Aaron Smith, Viper Demo Team NCO in charge. “You definitely have to be good at your job and know what you’re doing.”

“Craig is a high energy guy who likes to enjoy life,” said Lindsey. “(Flying) is what he was made to do.”

Even with the long, demanding hours it takes to be the Viper Demo Team pilot, Baker always makes time for his family.

“Craig is a very supportive husband and devoted father of our 2-year-old daughter and 2-month-old son,” said Lindsey. “His career has literally taken our family around the world and I am thankful that I’ve been by his side through it all.”

Baker, the Viper Demo Team “Rocket”, pierces through the skies, not only to do what he loves, but also to fulfill his ambition to support the Air Force by demonstrating to the world what the greatest Air Force is capable of. 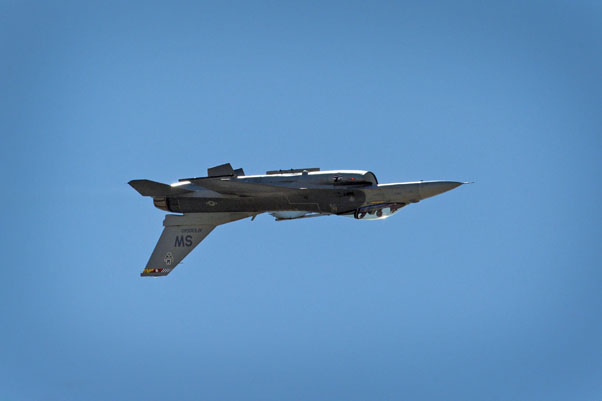