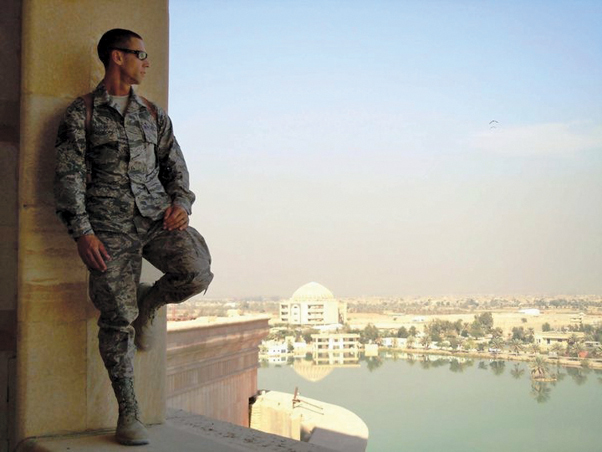 LUKE AIR FORCE BASE, Arizona — For 2nd Lieutenant Shaun Chaplain, 56th Comptroller Squadron flight commander, he made the career decision he knew would change his outcome in the Air Force. From Airmen ranks to general officer, the Air Force makes sure Airmen are equipped with the tools they need to lead other Airmen.

Before joining the Air Force, Chaplain was working dead-end jobs to make ends meet and afford college. He knew it wouldn’t get him close to reaching his goal of earning a degree, so he turned to the Air Force.

“The two reasons why I joined were to serve my country and to better myself,” he said. “I was working at a job with no future, and I knew I couldn’t get far in life nor continue to pay for college. My friend suggested I should join the Air Force and here I am.”

Chaplain was a technical sergeant working under cyber operations. While he enjoyed it, his ultimate goal was to become an officer.

“It was always a goal of mine to become an officer,” he said. “It took me a long time to finish my degree and the timing was never right. It took me almost 11 years to go to Officer Training School.”

OTS is a nine-week program that develops civilians and enlisted members into officers. OTS recently changed curriculum so active-duty, Reserve and Guard are all in one class.

“It’s almost like going to Basic Training twice,” he said. “They want to see how you can handle stress and accomplish tasks on your own. The great thing about OTS was that there was a mixture of people in the class. From senior NCOs brand new students that had never done anything Air Force related. It was definitely nice to see everyone working together.”

With Chaplain as a fresh 2nd Lieutenant, he’s ready for a leadership role.

“I know what it’s like to have bad leadership,” he said. “That’s what gave me even more motivation to become an officer.  Hopefully I can be an even better officer, because I know what it feels like to be on the enlisted side of the Air Force. I want to be the leader that Airmen below me can depend on.”

Chaplain’s first order of business is to learn his new career field as a finance flight commander.

“This is my first base as an officer,” he said. “Three months ago I was a tech sergeant working under cyber operations. Now I’m the flight commander for the 56th CPTS. There is still a ton of information I need to learn, but I’m excited to be in this career field.”

The 56th CPTS Airmen are excited to have Chaplain on board and to make his transition into the finance career field smooth.

“I’m excited that he’s working with us,” said Airman 1st Class Kevin Dawson, 56th CPTS customer service technician. “He’s aiming to be a great leader, and I know that once he gets completely spun up in the finance career field, he will help continue to make CPTS run well.