Leach is part of a three-year inter-service exchange program where he will be flying on the EC-130H Compass Call as a mission crew commander with the 41st ECS. While Leach learns about the EC-130’s capabilities to educate the Marine Corps when he returns, he also teaches the Airmen of the 55th ECG about the EA-6B Prowler’s capabilities.

“I am here until 2017,” said Leach. “I will be sharing tactics, techniques, and procedures to help educate the Air Force about how the Marine Corps integrates its assets, to include the Prowler, into its overall scheme of maneuver warfare; and how best to employ other joint assets, like the EC-130, into that big picture. While here I will also share tactics, techniques, and procedures from the Air Force and EC-130 community with my Marine colleagues so both communities are able to benefit from this exchange program. As well as take in what the EC-130 does and share that with my colleagues back on the Prowler.”

Despite being a Marine for 18 years, Leach said the switch to working with the Air Force has been smooth.

“It’s been a great transition,” Leach said. “The Air Force is an outstanding and professional organization that has and made me feel right at home from the moment I stepped on base about a year ago.”

After spending six years flying on the EA-6B Prowler, Leach had to grow accustomed to the differences of aircrew on the EC-130H Compass Call.

“One of the biggest differences on the EC-130 is we have enlisted flyers, whereas the Prowler there are only three to four officers working together with a mission crew, comprised of eight different mission crew positions and coordinating with four crew positions on the flight deck can be challenging.” Leach said. “When everyone is on their game and working as a team, the result is one of the most rewarding feelings you can experience.”

“The prowler is a tactical jet, so it is much closer to the fight and has a greater ability to escape with more maneuverability.” Leach said. “As far as the EC-130, is a standoff jamming platform and you have to take into account the threat environment both air and ground, because it’s not as fast as the other aircraft that are out there.”

Throughout the year that Leach has been here he has worked with pilots, navigators, linguists and electronic warfare officers from the 55th Electronic Combat Group.

“It’s pretty cool to have a Marine here,” said Senior Airman Tevin Wallace, 41st ECS linguist. “We get to see the other side and hear some of the stories.”

Leach is excited about working with the 41st ECS and plans on giving everything he has to offer. “Wherever I’m most needed to provide the most benefit to the group, that’s where I’ll head with a smile to share what I have to offer with who I train.” Leach said. “The 55th ECG is a great environment and a great team. I couldn’t ask for a greater group of individuals to work with over the next two years. They’re truly professional and excellent aviators up and down the spectrum.” 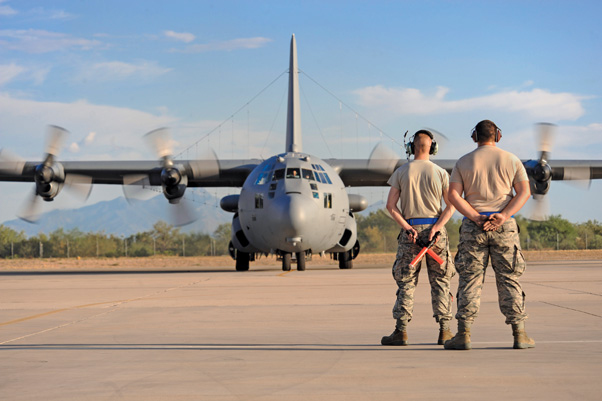