Home News “I know you don’t want me to, but I miss home”
Share
Facebook
Linkedin
Email 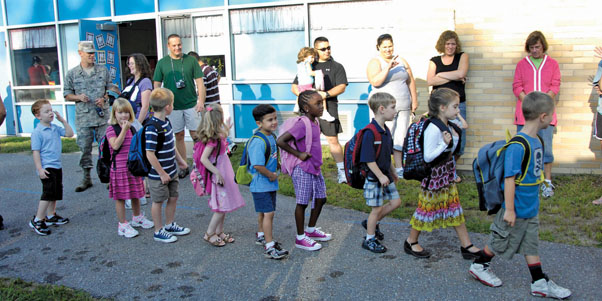 SCHRIEVER AIR FORCE BASE, Colo. — Pixar’s movie “Inside Out” is a movie every military family should see. I say family because it is not just for kids. Although it is an animated film, its themes are not light fare. This is a thinking person’s movie, full of imagination and psychological insight. More importantly, it is a movie of the heart. This is the one animated movie that might bring you to tears.

The movie begins with its main character, a teenage girl named Reilly, who has just arrived at her new home in San Francisco. She and her parents have moved from Minnesota where she had a great life, but now she is faced with a new start in a strange new place in addition to the sadness that comes from missing her old life in Minnesota. We see inside Reilly’s head and view the five emotions that are controlling her actions: Joy, Sadness, Disgust, Anger and Fear. These animated characters are “helping” Reilly cope with her new environment and are processing her experience as well as “reprocessing” her old memories. The move is a huge crisis in Reilly’s life. This traumatic event is pushing her resiliency to the limit and there is real tension as to whether or not she will recover.

According to the Department of Defense Department of Education, “The average child in a military family will move six to nine times during a school career. That is an average of three times more frequently than non-military families”. How many times have you moved your children during your military career? It is harder as they get older and develop closer, deeper friendships. This last move has been the most difficult for my daughter. Her brother is out of the house and on his own and this is her first move where she did not have one “friend” go with her. Let’s face it, moves are tough on kids.

My wife, daughter and I saw this movie with my wife’s family in Boise, Idaho. We all liked it a lot. My sister-in-law and her three teenage boys thought it was just ok, but they were not particularly impressed. I could not believe it. I thought it was profound and perhaps the best movie I have seen this year. Did we see the same movie? And then it hit me: they have never moved. She and her kids have lived in the same house for the last 20 years. Same neighborhood. Same friends. Same schools. Military kids and families know just how traumatic a move can be. Growing up in the military is great in so many ways. There are many blessings. But there is some sadness there too.

So, see this movie. Don’t just send your kids. Don’t watch it some other time, “later.” Watch it with your kids. And when it is over and you get control of your emotions, thank your children for their service. For the many moves they have made. For sticking with you even though it is hard to leave friends behind. Thank them. Hug them. Take them out for ice cream. Let them know you recognize their sacrifices too.

Utah: worth the drive

New Airmen get their bearings