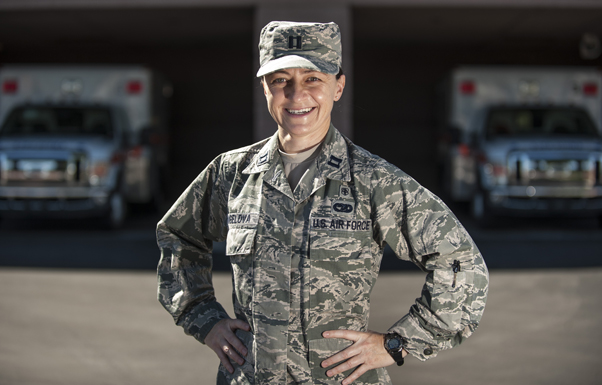 NELLIS AIR FORCE BASE, Nev.— She speaks Russian, Bulgarian and English while possessing master’s degrees in economics, law, business administration as well as international relations. She worked as a teacher and a border patrol agent at one of the busiest checkpoints in Bulgaria before immigrating to the United States, eventually beginning a career as an American airman.

“I speak a few languages and had to go in because I was due for [the Defense Language Proficiency Test],” Angelova said. “I was sitting in the waiting area when someone asked whether I was there to test for LEAP. I turned around and asked “What is LEAP?”

LEAP is managed by the Air Force Culture and Language Center, and its goal is to develop a group of airmen with different specialties and careers who have the ability to communicate in one or more foreign languages.

“The idea is to help maintain language skills and refresh them every so often so that you are up-to-date with changes in the language and culture,” Angelova said. “The mission allows you to improve your cultural awareness, along with your language skills, to be ready to support our worldwide operations.”

Angelova researched the program and decided to apply.

“I asked permission from my squadron commander, … and he said ‘Absolutely, yes.’” she said.

The board requires submission of the three most recent performance reports and an endorsement from the applicant’s squadron commander. Each applicant’s language skills and overall performance as an airman are reviewed during the selection process.

“A few months later, my squadron commander surprised me with the great news; I was selected for the LEAP program,” Angelova said.

Participants go through two phases to help maintain their language skills. Phase I is an online class, and Phase II is a Language Intensive Training Event. The LITE includes a three- to four-week temporary duty assignment in the country where the language is spoken in a natural environment, with opportunities to take a class in a local school, teach, participate in a humanitarian mission, or support a U.S Embassy mission — all geared toward refreshing language skills and cultural awareness.

“I thought about teaching or taking a class, but I have already done both,” Angelova said. “I decided to call the U.S. Embassy in Bulgaria and see if they’d like a month of linguist support under LEAP. The answer was ‘Yes, by all means — we can always use additional support.'”

Upon arrival in Bulgaria, Angelova was assigned to the Office of Defense Coordination, which reports to the U.S. military attache in Bulgaria.

She worked with the U.S. Army in support of Operation Swift Response, the largest NATO airdrop since the end of the Cold War. “The airdrop mission included several nations and was conducted simultaneously on the territory of few NATO member countries,” Angelova said.

During her final week, she was assigned to U.S Navy SEAL Team 10 as an interpreter and cultural expert. “U.S. Navy SEAL Team 10 was part of a joint planning and advisory team, conducting joint combined exchange training mission with the host country specialized unit for combating terrorism. It was truly impressive to see the impact of our operations overseas in sharing experience and building relationships,” she said.

Angelova had supported a NATO mission earlier in her career, while she was stationed at Joint Base Andrews in Maryland.

“I volunteered to be an escort during the NATO Air Chief Symposium in Washington D.C.,” Angelova said. “The event coordination teams took into consideration our foreign language skills and assigned us to the air chiefs whose country’s language we spoke. I was escorting the Bulgarian air chief at the time, [Lt. Gen. Constantin Popov].

“I had the opportunity to meet General Popov during my LEAP TDY three years after the symposium,” she said. “General Popov is currently the deputy chief of defense in Bulgaria. He remembered me with the best of impressions for outstanding support during the NATO symposium.”

Born in Sandanski, Bulgaria, Angelova was in high school when the country went through a transition period.

“My first dream was to fly for the military, but at the time they were not accepting girls as flyers,” Angelova said. “I was accepted into a civilian university and graduated [with] two master’s degrees: economics with Russian and Bulgarian, and law.”

In the meantime, she worked as a teacher and eventually became a border patrol agent.

“There are moments in life when you realize that something is missing and you know it is time to make a change. This is how I felt,” Angelova said. “I needed something that would let me spread my wings and fly. The environment I was in was slowly changing, but not fast enough to offer equal opportunities.

“The United States allowed me the opportunity to make my wishes come true,” she continued. “I applied for the permanent residency lottery, or the ‘green card lottery,’ which offered permanent residency for the States, and submitted the application for my parents and brother as well.”

Angelova’s brother won the lottery four years later and moved to Chicago. Four years after that, Angelova won her green card and found herself heading to the United States.

“I landed in Chicago and I felt at home in the U.S.,” she said. “I had no doubts how to utilize the blessing of winning the lottery. I was determined to follow my dreams and make a difference.”

She returned to her dream of serving in the military.

“My first impression from the U.S. military was during one of my border patrol night shifts at the checkpoint in Bulgaria,” Angelova said. “There was a U.S. military convoy crossing the border, and we were processing their paperwork. The image of the American soldier proudly serving left an everlasting impression of an incredible dedication and commitment. The U.S. military was making a difference around the world. I wished that one day I’d feel the same way.”

In 2003, she sought out an Air Force recruiter to help make her dream a reality.

“I started researching what I needed to do to join. I found a recruiting office, but was told that because I was 29, I couldn’t join,” Angelova said. “I read that there are waivers, but the recruiting office did not confirm it. So I thought, ‘Well, Reni, I guess we’ll have to close that chapter.'”

Angelova’s parents knew a family in California and shared her disappointment. They asked a recruiter in California about the waiver process, and he confirmed it. Angelova flew to California to initiate the process.

“I had found Tech. Sgt. Cory Frommer. He looked at my records, my degrees and language skills, and told me ‘I think that you’re worth the time and will be a great asset for the U.S. Air Force. I think your package will be very complicated, but I am willing to work with you,’” she said.

She joined the Air Force as an enlisted airman on March 23, 2004, and was assigned to Pope Air Force Base, North Carolina, in the air transportation career field.

“While [I was] at Pope Air Force Base, a Bulgarian delegation of mayors visited to discuss areas for potential use as NATO bases. They had lots of questions referencing noise and impact on the local population and surrounding areas during the visit,” Angelova said. “I was one of the briefers, surprisingly giving the briefing in excellent Bulgarian. The delegation was impressed. They were not expecting it.

“The base commander shared that my briefing broke the ice,” she said. “The negotiations went smoother than they did in the beginning, heading in a positive direction.”

With encouragement from her supervisors, Angelova decided to apply for a commission.

“They told me my dedication could be utilized in a different capacity,” she said. “I put in the package, and one morning, my Medical Service Corps recruiter called with the news of being selected and my [Officer Training School] date.”

Her first assignment as an officer was to Joint Base Andrews, and she was assigned here next.

Serving as an Example

Air Force Lt. Col. Laurie McKenna, 99th Medical Group’s senior practice manager, said Angelova is a stellar example of what any individual can be, regardless of where they come from, their culture, or their beliefs.

“You can become whatever you want, whenever you want, yet still, respect everything along the way,” McKenna said. “She is very motivational and inspiring. She exudes the four pillars of wellness. We bounce things off each other as a team. She knows her job. If she doesn’t know the answer, she tracks it down. So I know that if I give her something to do, I can forget it because I know she’ll get it done.”

McKenna encouraged other supervisors to let their airmen take part in programs like LEAP if they have the foreign language proficiency.

“I’ve seen her contribution to the LEAP program. All supervisors should keep in mind that when you have an airman you know has talents outside of what’s required for the position they are currently in, to expand those opportunities and make people aware of them,” McKenna said.

“Her trip over to Bulgaria was more than being an interpreter,” she said. “She was integrating many types of people across various forces in different countries. Having that talent and being able to do it successfully, is an opportunity that should be there for all our talented airmen.

“Workwise, it hurt when she left, and you can feel that, but for the larger Air Force mission, it was an absolute win-win situation. It was worth every moment that she was gone for her to be able to support that,” McKenna said.

AF delivers Iraqi F-16s for training in US