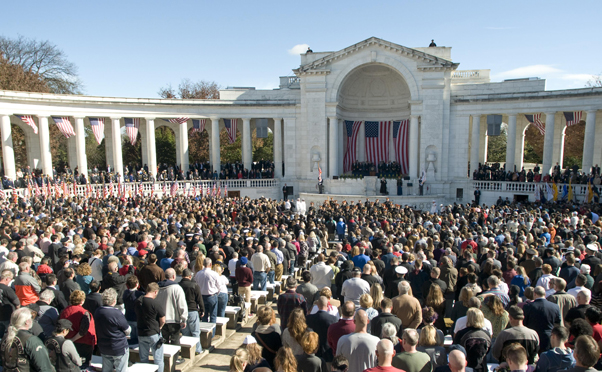 It was March 14, 1968, and Richardson, a flight engineer at the time, and others were called out to retrieve the Airmen after their F-4 Phantom II had been shot down. Both ejected safely but they landed near enemy positions along the Ho Chi Minh Trail.

The first rescue attempt for the pilot was fraught with enemy gunfire as bullets pierced the helicopter’s engine exhaust, causing the crew to quickly abandon the area.

“They shot the hell out of us,” Richardson, a 34-year Air Force veteran, said before the National Veterans Day Observance at Arlington National Cemetery.

The helicopter crew agreed to go back for the pilot. But a few more daring attempts proved unsuccessful and resulted in Richardson being wounded.

“It was bad news,” Richardson said of the hot landing zones. “We were shot off again and limped out of there with one engine, praying that we’d stay in the air.”

One of the Phantom’s crewmembers was later retrieved by another rescue unit. The other one was captured and shot to death by a militia member, he said.

Although Richardson’s actions that day earned him the Air Force Cross, the service’s second highest award, he stayed humble knowing that many others gave more.

“We have a lot of our brothers buried here,” he said, pointing toward the tombstones. “We should give them what they’re due for their sacrifice.”

But the day does not only honor those no longer here, but also living veterans. Many of whom have also made sacrifices, physical or mental.

“There’s a disconnect now with the younger generation because many of their family members have not served,” said Branch, who works as a middle school counselor at Fort Meade, Maryland. “When they see a uniform, they don’t really know what it means.”

Branch, who served 31 years in the Air Force, said these ceremonies can help youth reconnect by realizing the daunting tasks often faced by veterans.

“I think it’s important that our kids see things like this and feel the presence of what our nation is all about,” he said. “The more we do things like this, it becomes clearer the importance of the sacrifice that our men and women are making every day.”

That doesn’t mean veterans necessarily seek that attention, said retired Brig. Gen. Arthur B. Morrill III, the chief of staff for the Military Order of the World Wars, a nonprofit of veterans who support youth programs.

“Most of the veterans I know aren’t looking for recognition,” he said after the ceremony. “Most of them just want to continue serving with the communities and with other veterans.”

Instead, he showed gratitude to Americans for their treatment toward him and fellow veterans.

“I want to thank the American people for being so good to their veterans — for supporting them, for honoring them, and for being here today and all throughout the United States,” he said.

And that appreciation, President Barack Obama said, should not waver once the parades and ceremonies have ended.

“Our tributes today will ring hollow if we do not ensure that our veterans receive the care that you have earned and that you deserve,” Obama told the crowd at the ceremony. “This day is not only about gratitude for what (veterans) have done for us, it is also a reminder of all that they still have to give our nation, and our duty to them.”

He also noted that health care for wounded veterans has improved, particularly for those with post-traumatic stress and traumatic brain injury, and that the disability claims backlog for veterans has been slashed by nearly 90 percent.

Despite all the sacrifices, Richardson said that veterans are still dedicated to serving.

“The memories will always be vivid,” Richardson said of the harsh experiences suffered by many veterans. “There a lot of different scars but I think most guys would do it all over again to serve this country.”