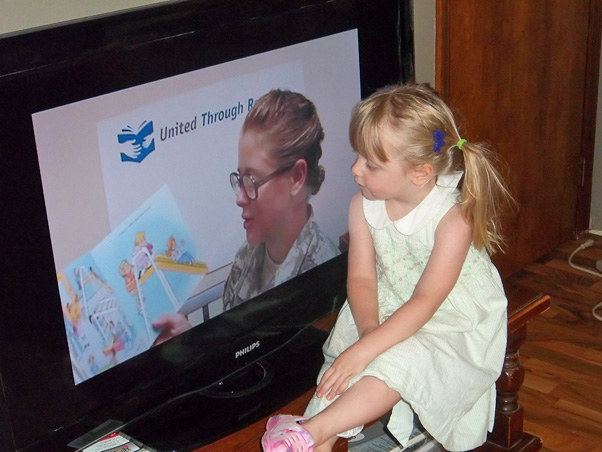 SAN DIEGO — No matter how far deployed service members are from their families, they still can take an active role in the care of their children, the military’s top noncommissioned officer said here yesterday.

“United Through Reading has made it possible for every parent, teacher, mentor and leader in our all-volunteer force to instill a keen appetite for literacy and enable the empowerment and impact that reading brings to every kid,” Marine Corps Sgt. Maj. Bryan B. Battaglia, the senior enlisted advisor to the chairman of the Joint Chiefs of Staff, said in his keynote address at the organization’s seventh annual Storybook Ball.

Reading should remain a priority for every parent, teacher and guardian, he said, and it’s the job of every leader to encourage this attitude. Rearing America’s youth is a “community affair,” Battaglia said.

There is empirical evidence that reading aloud is the “single most important act for building early reading skills,” said Sally Ann Zoll, the chief executive officer of United Through Reading.

“With the exception of letters, a sporadic short phone call from the USO pay phone or maybe a MARSgram, family connectivity was less hit and more miss,” Battaglia said.

While technology has made staying in touch easier, separations are still trying times for families — particularly those with children, the sergeant major said. And reunions can be just as trying, he added.

For many toddlers and young children, the returned parent is a “stranger in the household,” Battaglia said. Over the years, United Through Reading has played a key role in making separations and homecomings a bit easier through their storybook reading program, the sergeant major said.

In 2014 alone, service members recorded more than 25,000 videos through United Through Reading at locations around the world — at sea and on six continents — Zoll said.

Battaglia related the story of a soldier who deployed to Iraq in 2009, leaving behind his wife and two young boys. A few months into his deployment, United Through Reading helped the soldier record a video of himself reading “Green Eggs and Ham.” The organization sent a CD and two copies of the book to the soldier’s family, and the boys immediately reacted to the video as if their father was in the room reading to them, the sergeant major said.

Books and videos arrived every month for the duration of the soldier’s deployment, and the happiness they provided went both ways, Battaglia said. The soldier’s monthly visits to the USO tent to record the videos became a way for him to decompress from his hazardous job as an explosive ordnance technician, he said.

This is just one example of the tens of thousands of military families helped by United Through Reading, the sergeant major said. “Connecting families, educating, and raising the spirits of our military and families is what UTR does and its what they are good at,” Battaglia said.

The sergeant major told the audience that he is proud to call United Through Reading longstanding partners of the armed forces. “We all are grateful for your service to more than 100,000 beneficiaries and distributing more than 25,000 books to our military children,” Battaglia said. “You have allowed our military families to stay more connected, more cohesive and more complete.”