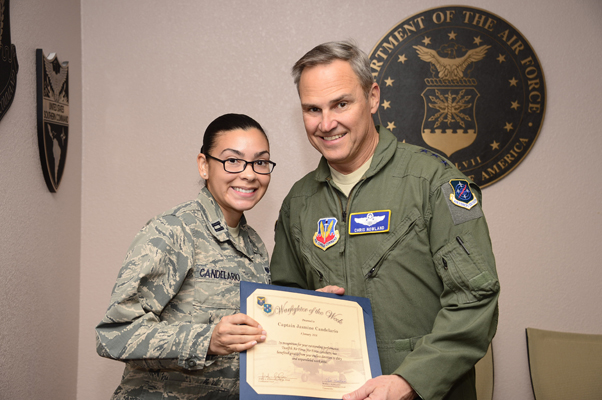 DAVIS-MOTHAN AFB, Ariz. — Capt. Jasmine Candelario, 12th Air Force (Air Forces Southern) Deputy Chief of General Law, was recognized as the Warfighter of the Week, Jan. 4, 2016.
Candelario began her military career in the Army, where she served for more than a decade.

“I served in the Army for almost 12 years before joining the Air Force,” said Candelario.

“Although most of the time I served in the Army was spent as a reservist, my final three years were on active duty operational support.  It was during that tour that I realized how much I loved being on active duty and wearing the uniform every day.”

While serving as on active duty operation support Candelario was given the opportunity to work with Airmen as a member of the Domestic All-Hazards Response Team. As a result of that experience, she decided to crossover from the Army Reserves into the active duty Air Force.
“I decided to apply to the Air Force because I knew firsthand how well they treated their people.  I knew that I would be joining a team of professional service members dedicated to excellence and service to our country,” said Candelario.

As the deputy chief of general law, Candelario is in charge of processing and reviewing all administrative discharges, Command-Directed Investigations, Reports of Survey, Flying Evaluation Board waivers and Freedom of Information/ Privacy Act records releases for the 20,300 Airmen of the 12 AF (AFSOUTH).

Candelario’s position also grants her the opportunity to work with our partner nations throughout the U.S. Southern Command’s area of responsibility.

“Part of my job is to liaise with our partner nations in the SOUTHCOM AOR during Legal Subject Matter Expert Exchanges,” said Candelario.  “During my last trip to Guatemala, I instructed the legal arm of the Ministry of Defense on our military justice system and the advancement of women in our military.”

When it came to choosing a Warfighter of the Week, Candelario’s section had no problems choosing her to represent them.

“I nominated Capt. Candelario for Warfighter of the Week because of her outstanding attitude and performance in Military Justice and International/Operations Law,” said Col. Michael Lewis, 12th Air Force (Air Forces Southern) Staff Judge Advocate.  “She has been vital to the transitioning the military justice programs for Beale AFB, Cali. and Offutt AFB, Neb. to the 25th Air Force, as well as Ellsworth AFB, S.D. and Dyess AFB, Texas to 8th Air Force. She also performed exceptionally during a recent subject matter expert exchange in Guatemala.”

Candelario’s performance and dedication has been recognized at all levels of command and has resulted in her recently being selected as the Special Victims’ Counsel at Davis-Monthan AFB, starting Feb. 1.

“The Judge Advocate General Lt. Gen. Christopher Burne selected Candelario to join the Air Force’s cadre of Special Victims’ Counsel and will be the sole Special Victims’ Counsel for Davis-Monthan,” said Lewis.  “While there she’ll be able to provide advocacy and independent representation to military members and dependents who are victims of sexual assault both at D-M and other bases in the Western U.S.”

When her tour as the Special Victim’s Counsel is over, Candelario is looking forward to increasing her job knowledge by working as a Deputy Staff Judge Advocate at a high tempo operational base.  Eventually, she also hopes to be selected to attend a Master of Laws program studying Procurement or Labor Law.

Warfighter of the Week is an opportunity for the Airmen throughout 12th AF (AFSOUTH) to share their story. The Warfighter of the Week initiative aligns with the 12th AF (AFSOUTH) commander’s priority of creating a work environment where someone knows you both professionally and personally.  These outstanding Airmen are selected by their directors based on their contributions to the Air Force’s mission.

How we quit smokin’