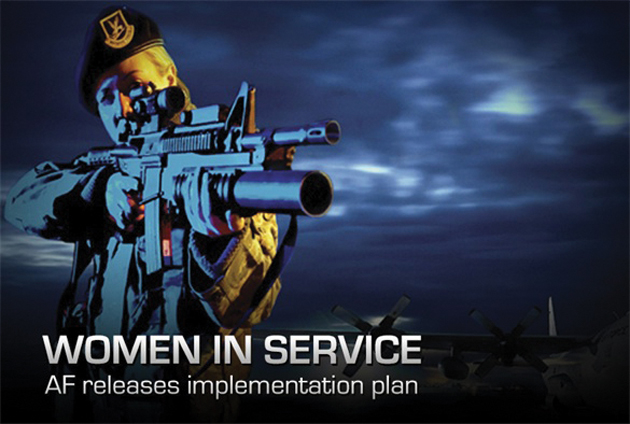 The secretary said because the integration process includes training and education evaluation at every level from recruits to the highest levels of leadership, implementing that policy was a priority.

And while “suggestions” have been made to lower standards for female Marines to meet quotas, Mabus emphasized it’s “an unacceptable notion” for every Marine, especially those women who choose to compete for those positions.

“It’s unacceptable under the law, to me, [and] to every other senior leader in the Pentagon because it would endanger not only the safety of Marines, but the safety of our nation,” he said.

“Standards can never be lowered for any group or any job. Standards will evolve as threats evolve, but they will evolve for everyone equally,” Mabus said.

The Marine Corps also is ceasing its tradition as the only service branch that separates men and women in boot camp, he added.

“As our Army gets smaller, our success increasingly depends upon our ability to maximize the contributions of every volunteer that fills our ranks,” Murphy said. “A soldier’s ability to meet established standards that contribute to our success will remain our overriding factor moving forward.”

And to take advantage of America’s diverse and deep talents, the Army began its integration efforts several years ago, leading to three primary conclusions, he said:

— Every soldier will have the opportunity to compete for every position to include infantry, armor and Special Forces;

— The Army’s high individual standards performance and professional conduct will continue to be based on requirements of the position and nothing else; and

— Enforcing the standards fairly and objectively will remain the guiding principle for mission success.

“We will continue to monitor and report the lessons we learn so the Army can collectively integrate the force and share our experiences,” he said.

Murphy added, “The Army is prepared to act and benefit from integration — now.”

No Quotas, No Pressure

To be successful in this endeavor, he said, the Army must “maintain and enforce rigorous combat readiness standards, remain a merit-based results-oriented organization and apply no quotas and no pressure.”

To do so, the Army will put in place a “very deliberate methodical and transparent process,” Milley said.

“Female cadets and officer candidates who meet the gender-neutral standard will be given the opportunity to request either infantry or armor branches” by spring, he said, adding that every active-duty infantry, armor and field artillery battalion today already has women soldiers.

“It is my professional judgement that some women can perform every single job in the United States Army to include infantry, armor and special forces,” Milley said. “Army leaders will continue to assess [integration] and we will adjust the process [so] our standards in combat readiness are maintained. You, the committee, have my word on this.”

When Defense Secretary Ash Carter on Dec. 3, 2015 opened all military occupations and positions to women, including combat roles, the Marines Corps began integrating all qualified Marines into previously closed MOSs in a well-planned responsible manner” based on Corps’ research, Neller said in his written statement submitted to the committee.

“We have already awarded additional MOSs to all Marines who earned it through primary MOS-producing schools,” he said, “and two female second lieutenants are now undergoing MOS training at the field artillery officer basic course.”

“The Marine Corps is a learning organization,” Neller said in his written statement. “We will evaluate the success of our plan and inform in-stride adjustments throughout this ongoing process as we recruit, train, develop, deploy and retain the highest-quality force.”