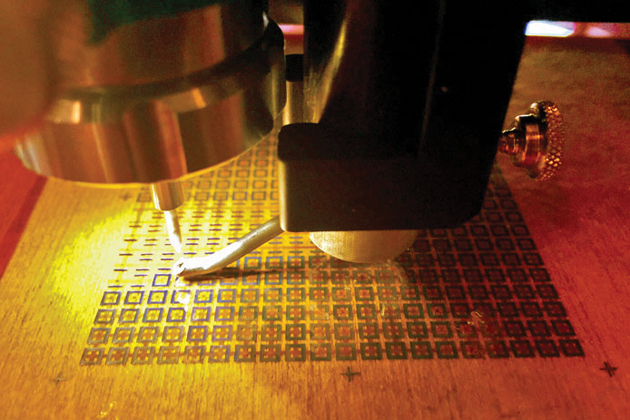 Scientists at a Raytheon-sponsored lab have developed a special electric ink that could one day replace radars and antennas – and technology publications love it.

Popular Mechanics and MIT Technology Review have both published features on the ferroelectric nano-ink developed at the Raytheon-UMass Lowell Research Institute (RURI), focusing on its potential to replace bulky, conspicuous equipment on military vehicles.

“The defense-related applications of this new process are huge,” Popular Mechanics wrote.

The ink contains electromagnetic materials that change their tuning based on the voltage flowing through them. Engineers can apply it directly onto a surface with an aerosol jet. In addition to doing the same work as whip antennas and radar arrays, the ink could also help military vehicles gain stealth by steering enemy radar waves away, the publication reported.

“Stealthy cars anyone? Maybe not, but how about radars that watch your blind spot, seamlessly and invisibly built into the car’s body styling?” Popular Mechanics wrote. “The multitude of uses for tunable inks means that the technology will eventually reach into nearly all of our lives.”

The Raytheon-UMass Lowell Research Institute opened in the fall of 2015. The company and the university built the lab to connect a new generation of innovators with established experts in defense and aerospace.