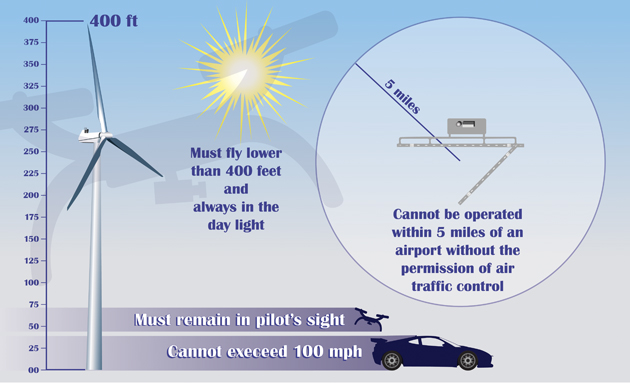 PETERSON AIR FORCE BASE, Colo. (AFNS)  — Due to popularity and past holiday sales, the amount of unmanned aerial vehicles, or drones, have soared.

The Federal Aviation Administration estimated more than one million UAVs were sold during the year-end holiday season. With that many new drones added to existing numbers, federal, state and local officials are concerned about safety, security and privacy related to these remotely-piloted craft.

Some of the biggest concerns are UAVs being used in close proximity to aircraft, personal privacy and terrorist attacks. There are numerous accounts of commercial jets reporting drones in close proximity and even accounts of explosives and radioactive material loaded into them. The overall message is to think about where the UAV is flying and act accordingly.

“UAVs are highly capable machines and can be abused. Privacy is a basic right and some people feel that their rights are being violated should the UAV have a camera,” said Victor Duckarmenn, the 21st Space Wing Program Management Division quality assurance manager and operations security expert. “The rules are quite specific in the use of drones and permissions, certifications and registration are for the public good.”

In 2015, the FAA released rules for hobbyists operating UAVs. Drones must be operated within sight of the remote pilot during daylight hours. This rule allows for corrective lenses worn by the pilot, but not the cameras on the craft itself. The aircraft cannot fly higher than 400 feet in altitude and must be operated at less than 100 mph. They have to give way to all other aircraft and local air traffic control must be notified when UAVs are operated within 5 miles of an airport.

The rules also say operators must not fly over sensitive areas and structures, such as power facilities, prisons and water treatment plants and remain 25 feet away from individuals and vulnerable property.
All UAVs that are heavier than .55 pounds must be registered and documents displayed upon request. Drones between about a half a pound and 55 pounds in weight must be registered and the FAA has a website to help in taking care of that requirement.

“The most important thing to remember is your training in safety,” Duckarmenn said. “There is available drone flight training and annual shows where you can pick up pointers from experienced flyers.”
The terrorism concerns are serious. In 2011, CNN reported that the FBI arrested a man who was trying to use a model fighter jet loaded with explosives to attack places like the Pentagon and the U.S. Capitol. In another report from last year, the news network said a drone containing a small amount of radioactive cesium was found on the roof of the Japanese prime minister’s office.

More recently, the Agence France-Presse reported from the DEF CON hacker conference in Las Vegas that a demonstration showed a drone could be loaded with equipment to break into wireless networks.
“Remember — the system is wireless and can be commandeered. Firmware on these devices has not evolved as much as its popularity,” Duckarmenn said.

He recommends joining local drone clubs to learn about, and stay up on, rules and to avoid making legal mistakes.
For more information, check out the FAA website or the Small UAV Coalition website.