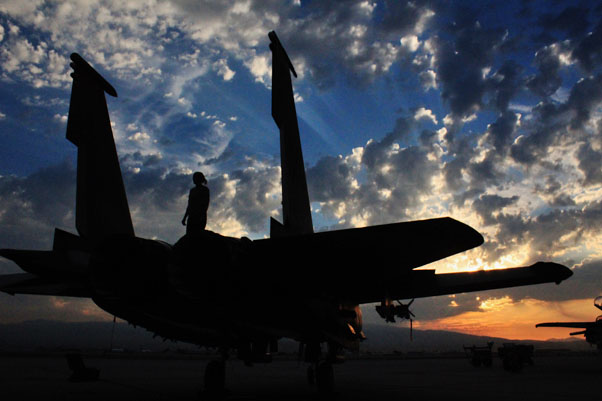 MOUNTAIN HOME AIR FORCE BASE, Idaho — As Col. Michael Lawrence, the 366th Maintenance Group commander, riffled through pages of bullets highlighting the group’s 2015 achievements, he came across a photo of a nearly-unidentifiable airman standing atop a shadowy F-15E Strike Eagle.

“On the front page of this package is [Airman 1st Class] Kristin Hall from Opp, Alabama,” Lawrence said as he pointed to the mysterious figure.

The photo is a small snapshot of the many months maintainers spent away from home during 2015, working in Korea, Hawaii, Nevada and nearby Gowen Field.

She’s one of many maintainers who entered the military during a time of budget constraints and force shaping, and hit the ground running.

“It’s kind of a blur,” remarked Hall, reflecting on her transition from Alabama overalls to Air Force coveralls.

Lawrence’s ability to identify one of his hundreds of Regulators came as a surprise to Hall, who is one of many maintainers who aren’t privy to the “big picture,” whether it’s a nomination for an Air Force-level award, or the true impact they have on the mission.

“A lot of the airmen don’t really know why it’s got to fly,” said Tech. Sgt. Timothy Luke, 366th Equipment Maintenance Squadron avionics lead. “They just know they have to fix something that’s broken, which they’re really good at.”

In a low-manning environment, the process of fixing an aircraft can often turn into an airman fixing a process. This, incidentally, is the spirit of the Daedalian award. The word “Daedalian” comes from the mythical Greek inventor Daedalus.

“They’ve been telling us that we have to do more with less,” Luke said, speaking first-hand about some changes to his job. He was one of many airmen who learned tasks from other career fields, saving hundreds of man hours throughout the year.

This sparked ideas from airmen across the group, like crew chief Senior Airman Corey Bethel, who had an idea to improve faulty door fasteners on travel pods, which are used for cargo storage in-transit.

“I just saw it and thought there was a better way to do it,” Bethel said about submitting his idea.

Other accomplishments include revisions to 24 precision measurement equipment laboratory processes which saved the Air Force approximately $1 million across five major commands, and maintaining aircraft in three locations in less than 90 days – all while training other MAJCOMs in their processes.

While Bethel’s idea is one whose origins can be traced, it’s unclear as to where some of the others came from.

“I’m almost positive most of these innovations came from the airman [tier],” Luke said. “People who have to work with the processes we have every day notice something’s broken and start talking about how to fix it. Then, somehow, the idea spreads and the next thing you know it’s changed.”

The stresses and challenges of 2015 also brought moments of pride. Bethel’s moment was fixing a near-impossible hydro leak in the nick of time. Hall’s was developing friendships that helped her get through the year and be able to look back and say “I did something.” Luke remembers the time a group of maintainers quickly and efficiently responded to a severe injury of one of their coworkers. (Visit this link: http://www.mountainhome.af.mil/news/story_print.asp?id=123453446 to read the “Blood Brothers” article)

But it’s taken a lot of work to get to this point. The 366th MXG Deputy Commander, Lt. Col. John Jacobus, was stationed at Mountain Home Air Force Base many years ago and paints a different picture of the 366th MXG.

“There was a divide between the groups,” Jacobus said. “People didn’t work together at all.”
Now, he says he’s never seen a better maintenance group – driven by young airmen consistently performing in stressful, sometimes painful conditions.

“What brings tears to my eyes is seeing those airmen out there, in 20-degree temperatures with 25-mile-an-hour wind getting the job done,” Jacobus said. “That’s just what we do.”

In a way, maintainers are a paradox. They’re both proud, yet humble. An officer will say the enlisted are responsible for the work, a noncommissioned officer like Luke will say it’s the younger airmen, or a combination of efforts.

And the airmen? Many of them are like Hall and Bethel – young faces in a pool of faces that are younger still, all working to get a job done. Bethel, Luke and Hall say they don’t do it for the fame or the recognition, or for a rare shot at an even rarer award. They do it because, at their very core, that’s just what they do.

Some people would see the picture of Hall and the F-15E simply as good photo. Others might not see it as significant at all; Hall almost didn’t. Lawrence and Jacobus, though, see something far more insightful.

“Despite all that people say about a degradation of America’s youth your group of folks is just as smart and resourceful – I would argue smarter and more resourceful – than any previous generation,” Lawrence said. “Rest assured, we’re going to be just fine.”

“It’s these young faces,” Jacobus said, smiling as he closed the award package and pointed to a cluster of photos depicting the young faces of the Air Force.

They see the backbone of the maintenance career field, the innovative spirit of a Mountain Home AFB “Gunfighter,” the reason the mission gets accomplished day after day at location after location around the world.

They see a young face.

They see a Regulator.