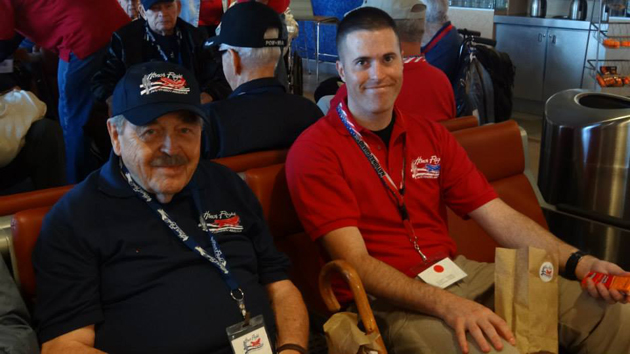 DAVIS-MONTHAN AFB, Ariz. — How would you feel if a memorial was erected in your honor and you never had a chance to see it? For many World War II Veterans this is a reality. But thanks to Honor Flight Network and its volunteers, some vets will be able to visit the memorial that was built to recognize the sacrifices they made for their country.

The Honor Flight Network is a program that was established in May of 2005 to transport American veterans to Washington, D.C., so they can visit the memorials that were dedicated to them. Top priority is given to the most senior Veterans as well as to those suffering from terminal illnesses.

Staff Sgt. David Wilcken, 612th Air and Space Operations Center air tasking order production technician, was recently selected by Davis-Monthan AFB to be a guardian on an Honor Flight trip to Washington D.C., Oct. 6-8, 2013. Wilcken was designated as a guardian for Robert Yeschek, a World War II, Korean War and Vietnam War Veteran, who traveled to Washington D.C., with 76 other southern Arizona Veterans and their guardians.

The Desert Lightning Team Top 3, an organization composed of the top three enlisted ranks, wanted to get more involved in Honor Flight by sponsoring a guardian for a World War II Veteran, but they wanted to make sure they had the right guardian for the Veteran.

“Over two days we interviewed 26 members across D-M,” said Master Sgt. Kristi Tellier, DLT Top 3 vice president. “Staff Sgt. Wilcken was chosen because he has a personal connection with World War II Veterans since he had two grandfathers that served. We were impressed by his enthusiasm and genuine interest in honoring these heroes.”

Both of Wilcken’s grandfathers served in WWII, one fought his way up through Italy and the other was took part in the occupational forces in Germany. With the Desert Lightning Team Top 3 looking to sponsor an Honor Flight guardian, he saw this as an opportunity to show his thankfulness towards his grandparents for the sacrifices they both made.

“They both passed away before I really understood the gravity of their sacrifice and I was never able to express my thanks to them,” Wilcken said. In a way I really wanted this opportunity to give closure to that regret and more importantly support those who they served with.”

Wilckenwas humbled by the opportunity to be an Honor Flight guardian. As a guardian ensured that all of Yeschek’s needs were met, which included helping him in and out of chairs, up and down stairs, bringing his food to him, and pushing him around in his wheel chair.

“Really whatever he needed to be comfortable I was there to make sure it happened,” Wilcken’s.
In addition to ensuring Yeschek was comfortable for the duration of the trip, the Honor Flight team assigned additional duties to the guardians. Wilcken was put on the wheelchair crew detail, which loaded and unloaded all the wheelchairs onto the bus.

“This trip really wasn’t a vacation, I worked long hours and would be exhausted in the evening, but it was worth every minute,” said Wilcken.

The night before their departure the guardians put together a surprise mail call. Bags filled with letters from strangers who expressed their gratitude to the vets for their service and sacrifices were given to the honorees.

“These men and women are really are the greatest generation,” said Wilcken. They put down the tools of their trade and did what they had to and most of them didn’t expect anything in return.
During his trip, Wilcken learned that simply thanking a Veteran for their service makes a world of difference in their life.

“I feel that I have gained several new friends, especially the vet, Bob Yeschek, that I accompanied,” said Wilcken.

By the end of 2012 the Honor Flight Network has helped transport over 98, 500 veterans to Washington, D.C. Anyone wanting to get involved in the Honor Flight hub of Southern Arizona (Tucson, AZ) can visit the site http://honorflightsaz.org/ for more information.