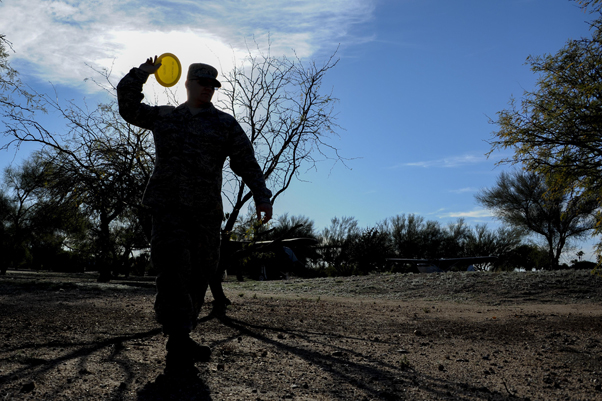 The 355th Fighter Wing commander, U.S. Air Force Col. James Meger, reached out to Airmen of Davis-Monthan AFB to get ideas for revolutionizing the base through a new initiative called Innovate DLT, which gives Airmen a direct line to Meger and allows them to define a problem or propose an improvement that will impact members of the base.

“The course gives us a great opportunity to get people to go out and do something outdoors for a low cost,” said Doub.

Disc golf is a sport played with Frisbees and is similar to golf except, instead of hitting a golf ball into a hole, a disc is thrown into a metal basket.

Brown and Doub suggested that the course site be located behind Heritage Park. They’ve planned out a nine-basket course, permitting for an 18-hole course by hitting each basket twice.

Through Innovate DLT, Airmen have been able to confidently bring their new ideas and different ways of thinking forward.

“I believe Col. Meger was very receptive to all of the presented ideas,” said Brown. “This type of event is awesome to put forth new ideas.