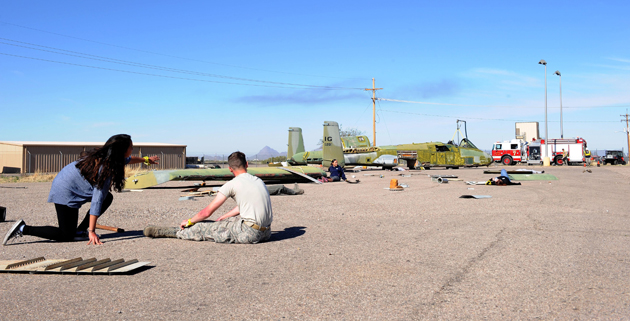 DAVIS-MONTHAN AIR FORCE BASE, Ariz. — People are on the ground screaming, parts of a plane are scattered everywhere, and a fire is raging. This was the scene that was set for the BUSHWHACKER 16-02 aircraft crash emergency management exercise at Davis-Monthan Air Force Base, Ariz., Feb 24, 2016.
“Units from all over the installation used this opportunity to test their response capabilities and plans for dealing with an aircraft crash during an air show,” said U.S. Air Force Master Sgt. Mark Molineaux 355th Fighter Wing inspector general investigation superintendent.
The exercise simulated a scenario in which a civilian drone came too close to an A-10 during takeoff. The drone was drawn into the A-10’s engine, causing the engine to explode and the A-10 to crash into a crowd of spectators. The 355th Medical Group moulaged 45 Airmen to act as the victims in the crowd.
To help create a realistic crash scene for the exercise, the Inspector General and Investigations office used a retired A-10A Thunderbolt II from the 309th Aerospace Maintenance and Regenerations Group, to simulate the downed aircraft.
“With support from the 355th Logistics Readiness Squadron, 355th Equipment Maintenance Squadron and 309th AMARG, this aircraft has been given a new life in its role as an aircraft crash exercise training aid,” said Master Sgt. Dennis McMurray, 355th FW IGI inspection planner. “It can once again serve as a force multiplier, enhancing the emergency preparedness of D-M Airmen.”
Dennis engaged with the 309th AMARG who helped select the right aircraft and with the approval of the A-10 System Program Office to ensure all the correct documentation was completed.
“After that, AMARG continued to support us, providing cranes and crane operators to a joint effort with the 355 Logistics and Readiness Squadron and 355 Equipment Maintenance Squadron to move the aircraft into position at the simulated crash scene,” McMurray said. “The 355 LRS and 355 EMS were also invaluable in preparing the aircraft by removing components and taking various steps to make the aircraft fit the scenario.”
To eliminate any confusion, the IGI office created its own tail number for the aircraft.
“We were a little concerned that the original tail number on this aircraft would allow for some confusion. Exercise players, when referencing records, would quickly be able to identify that this aircraft that ‘Crashed’, has actually been retired since 1994, which wouldn’t make much sense,” Molineaux said.
The aircraft now bears the tail marking “90-201,” a nod to the Air Force Instruction that directs the Commanders Inspection Program, under which, these exercises are conducted.
“The exercise has spurred conversations all over the installation as to what we did right as a team, and how we could be better,” Molineaux said. “Having this A-10 as an exercise tool is helping our office to aid the 355th Fighter Wing in providing a combat-ready force, developing airmen, optimizing resources and caring for our families, the 355th Fighter Wing’s focus areas!”

Lean Into Your Flaws: A lesson from the Leaning Tower of Pisa

Suicide prevention – hopes for the future