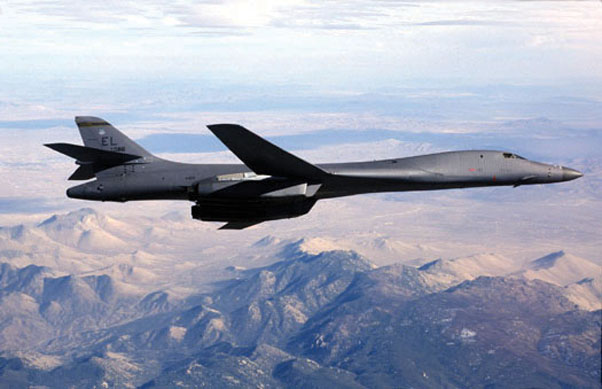 Carrying the largest payload of both guided and unguided weapons in the Air Force inventory, the multi-mission B-1 is the backbone of America’s long-range bomber force. It can rapidly deliver massive quantities of precision and non-precision weapons against any adversary, anywhere in the world, at any time.

The B-1 is a highly versatile, multi-mission weapon system. The B-1B’s synthetic aperture radar is capable of tracking, targeting and engaging moving vehicles as well as self-targeting and terrain-following modes. In addition, an extremely accurate Global Positioning System-aided Inertial Navigation System enables aircrews to navigate without the aid of ground-based navigation aids as well as engage targets with a high level of precision. The addition of a fully integrated data link (FIDL) with Link-16 capability provides improved battlefield situation awareness and secure beyond line of sight reach back connectivity.  In a time sensitive targeting environment, the aircrew can use targeting data received from the Combined Air Operations Center or other command and control assets to strike emerging targets rapidly and efficiently.