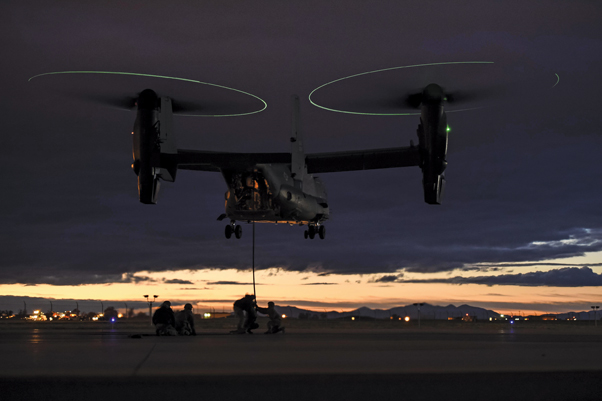 The CV-22 Osprey is a tiltrotor aircraft that combines the vertical takeoff, hover and vertical landing qualities of a helicopter with the long-range, fuel efficiency and speed characteristics of a turboprop aircraft. Its mission is to conduct long-range infiltration, exfiltration and resupply missions for special operations forces.

This versatile, self-deployable aircraft offers increased speed and range over other rotary-wing aircraft, enabling Air Force Special Operations Command aircrews to execute long-range special operations missions. The CV-22 can perform missions that normally would require both fixed-wing and rotary-wing aircraft. The CV-22 takes off vertically and, once airborne, the nacelles (engine and prop-rotor group) on each wing can rotate into a forward position.

The CV-22 is equipped with integrated threat countermeasures, terrain-following radar, forward-looking infrared sensor and other advanced avionics systems that allow it to operate at low altitude in adverse weather conditions and medium- to high-threat environments.

The first operational CV-22 was delivered to Air Force Special Operations Command in January 2007. Initial operational capability was achieved in 2009. A total of 51 CV-22 aircraft are scheduled to be delivered by the end of 2019.

Around the Air Force: Jan. 4

Be S.M.A.R.T. when setting goals