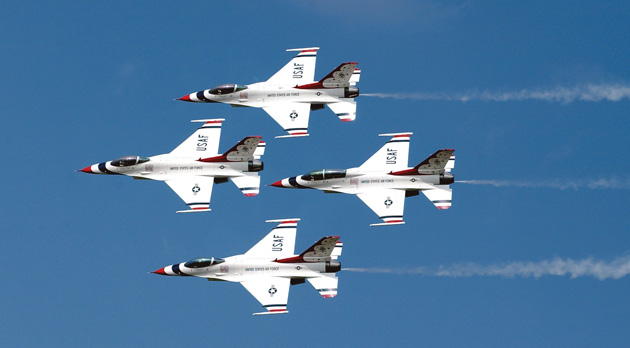 The U.S. Air Force Air Demonstration Squadron, the Thunderbirds, performs precision aerial maneuvers demonstrating the capabilities of Air Force high performance aircraft to people throughout the world. The squadron exhibits the professional qualities the Air Force develops in the people who fly, maintain and support these aircraft.

Objectives of the squadron are:

A Thunderbirds air demonstration is a mix of formation flying and solo routines. The four-aircraft diamond formation demonstrates the training and precision of Air Force pilots, while the solo aircraft highlight the maximum capabilities of the F-16.

The pilots perform approximately 30 maneuvers in a demonstration. The entire show, including ground and air, runs about an hour and fifteen minutes. The season lasts from March to November, with the winter months used to train new members.

Officers serve a two-year assignment with the squadron, while enlisted personnel serve three to four. Replacements must be trained for about half of the team each year, providing a constant mix of experience.

The squadron performs no more than 88 air demonstrations each year and has never canceled a demonstration due to maintenance difficulty. More than 280 million people in all 50 states and 57 foreign countries have seen the red, white and blue jets in more than 3,500 aerial demonstrations.

In addition to their responsibilities as the official U.S. Air Force aerial demonstration team, the Thunderbirds are part of our combat force. If required, the team’s personnel and aircraft can be rapidly integrated into a fighter unit at Nellis Air Force Base, Nev. Since the aircraft are only slightly modified, they can be made combat-ready in less than 72 hours.

The Lockheed Martin (formerly General Dynamics) F-16 Fighting Falcon represents the full range of capabilities possessed by the Air Force’s tactical fighters. This highly maneuverable multi-role fighter has proven to be one of the world’s best precision tactical bombers and air-to-air combat aircraft. The only modifications needed to prepare the aircraft for its air demonstration role are installing a smoke-generating system in the space normally reserved for the 20mm cannon, and the painting of the aircraft in Thunderbird colors.

The Thunderbirds were officially activated June 1, 1953, as the 3600th Air Demonstration Team at Luke AFB, Ariz. Their first aircraft was the straight-winged F-84G Thunderjet, a combat fighter-bomber that had seen action in Korea. Early in 1955 the team transitioned to the swept-winged F-84F Thunderstreak.

In June 1956, the team moved to its current home at Nellis. At the same time theThunderbirds traded the veteran F-84 for the world’s first supersonic fighter, the F-100 Super Sabre — an aerial platform that would serve the Thunderbirds for 13 years. More than 1,000 demonstrations were flown in the Super Sabre, thrilling spectators around the world. The team changed briefly to the Republic F-105 Thunderchief. After only six shows, in 1964, due to an extensive modification that became necessary on all Thunderchiefs, the Thunderbirds returned to the F-100.

From 1969 to 1973, the Thunderbirds flew the Air Force’s front-line fighter, the F-4E Phantom. In 1974, the Thunderbirds converted to the T-38 Talon, the world’s first supersonic trainer. The T-38 was more fuel-efficient and less costly to maintain than the larger F-4.

Early in 1983, the Thunderbirds reinstituted their traditional role of demonstrating the Air Force’s front-line fighter capabilities. Transition to the F-16A allowed the team to retain manpower and fuel efficiency while demonstrating to spectators the latest in fighter technology.

The Thunderbirds returned to Europe for the first time in 13 years in 1984. More than 3.2 million people viewed the aerial demonstrations in 11 countries.

In 1986, the Thunderbirds participated in the rededication flyby of the Statue of Liberty and in September, another milestone was attained when the team went over the 200 million mark for total attendance.

The largest crowd, 2.25 million people, to see a performance was at Coney Island, N.Y., July 4, 1987. The 1987 Far East tour marked their debut in Beijing, China — the first American military demonstration performance in a Communist country.

Operation Desert Storm cancelled the 1990 European tour and the season was shortened. The team converted to the F-16C in 1992, bringing the F-16A era to an end.

In 1996, the team traveled again to Europe where crowds from former Warsaw Pact countries enjoyed the “Ambassadors in Blue.” In July 1996, the team participated in opening ceremonies of the Centennial Olympics held in Atlanta which were viewed by an estimated 3.5 billion people around the world.