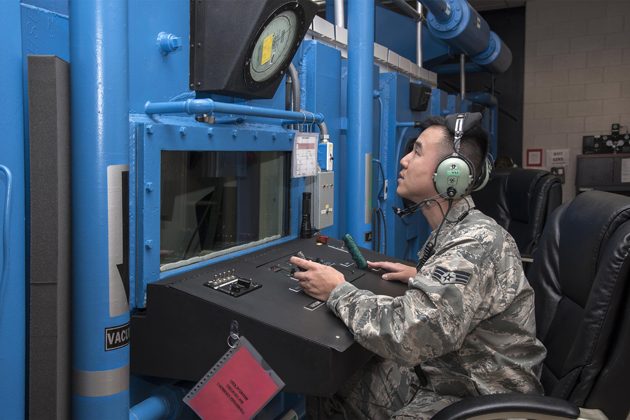 PETERSON AIR FORCE BASE, Colo. (AFNS) — From being a young boy who could not speak a word of English to an Airman who instructs others on the effects altitude has on the human body, Senior Airman Jae Yu, of the 21st Aerospace Medicine Squadron, practiced resilience far before he ever joined the Air Force.
Myong and Susan Yu relocated to Maryland from Seoul, South Korea, as part of a work program allowing them to obtain green cards. They brought their 11-year-old son Jae with them to start a new life in a new country. But when he started his sixth-grade classes in Salisbury, Maryland, Yu knew no English.

His parents had him practice writing the English alphabet to familiarize himself with this new and vastly different style of letters. In school, Yu participated in English as second language courses and because he was young, picked up the new language quickly. By the end of middle school, he was comfortable with English. In high school, he mastered it well enough to earn honors in math, science and French, as well as become a member of the National Honor Society.

“Once I picked up English I was able to ease into things,” Yu said.

At first, he said he felt somewhat isolated because he did not understand what was being said in English. He recalled sitting in class while a lot of sounds surrounding him made no sense.

“Math was no problem, I could do it just fine looking at the equations, but anything with words in it I had no idea,” he said.

At the same time he faced language challenges he also had to adapt to differences in the school system. In South Korea, children help clean the facility after class, and classes also are less interactive in what is known as the Japanese education system.

Transportation was another thing the family had to get used to. In South Korea, things were much closer together and a short walk often got people to where they wanted to go including school. However, in his new home, he had to get used to school busses and municipal transit.

His English proficiency improved and his academic success in high school led to the University of Maryland where he majored in cell genetic biology. Even with all his progress and academic achievement Yu was still looking for more.

What he was looking for was discipline. His father spent about a decade in the South Korean air force and thought military service might help Yu in his daily life. He signed up and about four years later he’s glad with the decision.

Challenges Yu faced while growing up helped him succeed in the Air Force. The cost of moving the family to the U.S. was great, but they made the effort and saw it through. His parents worked hard and became U.S. citizens while Yu was still a teenager, making him a citizen as well.

“I realized that if you put your mind to it, then you can push yourself and achieve things that you would normally think to be very hard to achieve,” he said. “We didn’t have much money when we moved to the U.S. It costs a lot of money and time to move to the U.S., but we managed to make it happen.”

Yu serves in the squadron’s Aerospace and Operational Physiology Flight, working with military personnel to help them understand the physiological effects of high altitude. He leans on his science background to provide verbal guidance to students and to monitor the controlled environmental chamber.

His efforts and ability to adapt were recently recognized when he was named Air Force Space Command Aerospace and Operational Physiology Airman of the Year for 2015.

My brat makes me proud