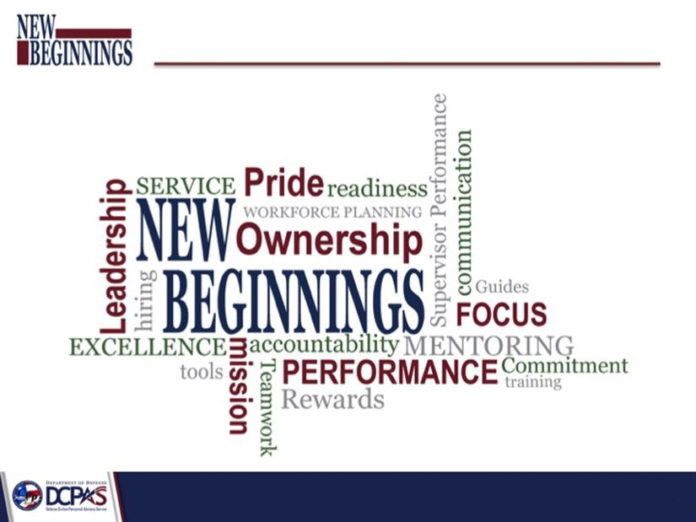 Paige Hinkle-Bowles, the deputy assistant secretary of defense for civilian personnel policy, said New Beginnings represents a series of requirements that grew out of the National Defense Authorization Act of 2010.

“For us, it has been the culmination of a collaborative process to institutionalize a culture of high performance in a variety of different ways,” she said in a phone interview.

Part of this is the Defense Performance Management and Appraisal Program. Hinkle-Bowles said this is the critical element for the whole New Beginnings process.

The new program will have three rating tiers — outstanding, fully successful and unacceptable. Key to the program is its emphasis on timely recognition and reward of employee contributions throughout the cycle, which runs annually from April 1 to March 31, Hinkle-Bowles said. “Continuous feedback has to happen,” she said. “This isn’t about sitting down on the 365th day and giving feedback.”

Supervisors must have at least three documented discussions with each employee during the rating year. “More is better,” Hinkle-Bowles said. “We are encouraging ongoing feedback and ongoing communication throughout the rating cycle.”

A total of 14,500 employees from a cross section of organizations from the Office of the Secretary of Defense, Navy, Army and some defense agencies are scheduled to transition into the appraisal program this month, she said. “We will phase the remainder of the employees into the program over the next couple of years,” Hinkle-Bowles said.

The program will cover more than 600,000 employees when fully implemented. Some employee groups, such as senior executive service employees and intelligence professions will not be part of the new program. “They are already in a system covered by another statutory requirement,” she said.

Employee unions have been an important part of the effort, Hinkle-Bowles said.

“The whole process started with three labor-management design teams that provided pre-decisional recommendations to the department in several different areas, but ultimately those recommendations covered everything from performance management, hiring flexibility, training and development, work force incentives and other automation,” she said. “Unions continue to play a part as we move forward.”

The enterprise-wide appraisal program should also benefit employees as they move around inside the department. They will no longer have to learn the requirements of a myriad of different appraisal systems as they move onward and upward, she said.

The appraisal program builds on New Beginnings processes including a hiring managers toolkit that was released in May 2015, a new DoD Instruction 1400.25 Volume 431 “DoD Civilian Personnel Management System: Performance Management and Appraisal System” published in February, and train-the-trainer sessions launched in January.