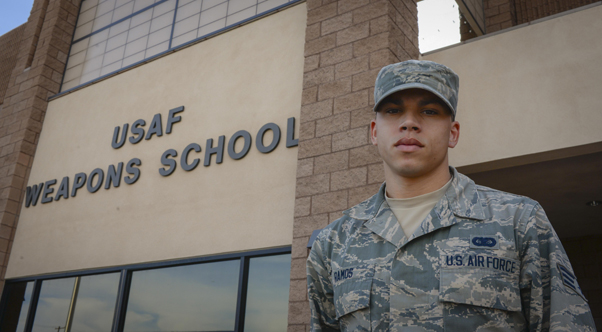 NELLIS AIR FORCE BASE, Nev.— What is it to be a hero? When hearing this word one probably automatically associates it with ‘super’ in front of it or pictures a caped crusader. One tends to lose sight that there are real-life heroes performing brave acts every day, but what defines what it really means to be a hero?

There is no exact definition of a hero. The truth is that a hero is often simply an ordinary person in extraordinary circumstances who prevails in the end. Heroes make a difference in someone life, no matter how big or small. A hero is someone that people can look up to, and help others regardless of their convenience.

“I got off early from work and I was going home to San Diego,” said Ramos. “I was driving on Interstate 15 South and the moment I hit my halfway mark, Barstow County, is when the accident happen. I was behind a big rig and I saw a car slowing down and what I thought was a dust cloud was in fact the small sedan flying in the air toward the barrier on the left shoulder of the freeway.

“When only one passenger was left in the car, an off-duty fireman came to the side of the door and asked me what injuries the guy had. The passenger let me know that his arm was banged up and his lower back hurt. At that moment, the off-duty fireman informed me not to touch him and to wait for California Highway Patrol and ambulances to arrive.”

“I was at dinner when I received the call and I just said ‘see you on Monday,’ stated Staff Sgt. Richard Garcia, USAFWS NCO in charge of the command section. “I wasn’t shocked; it was nothing short of what I expect of him. He does exceptional things at work already and doing things that we don’t expect of him. It didn’t surprise me because that is the type of person he is and I’m really proud of him.”

Garcia stated that even though Ramos didn’t have to use the training that the Air Force provides like Self- Aid Buddy Care in this particular situation it still played a role, as the training one receives in the Air Force instills that initiative to jump in and help.

When Ramos was faced with this situation he could have just drove on by and continued on his way home. Instead, he put the well-being of others ahead of himself and became a real-life hero to those four passengers that night.