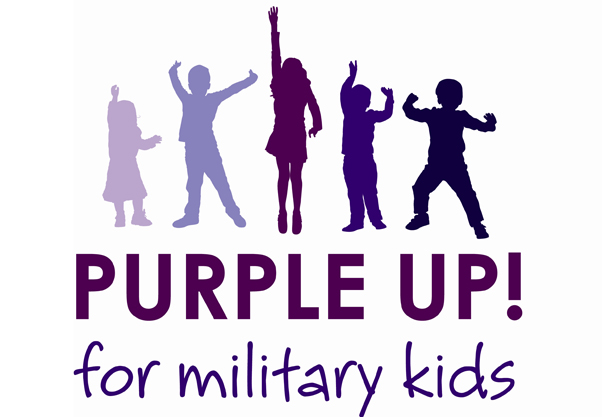 WASHINGTON (AFNS) — Time to get your purple on, America.

April 15 is Purple Up! day, a time for Americans to show their support for military families. Department of Defense Education Activity schools will celebrate the event April 20 because of spring recess.

“It’s to build awareness for the needs of military families,” said Barbara A. Thompson, the director of DOD’s Office of Family Readiness Policy.

This is not a DOD program, but a grassroots effort that began in 2011 as a way to honor the sacrifices military children make every day for the nation. According to the 4-H Military Partnerships website, 4-H clubs in New Hampshire developed the “Purple Up! for Military Kids” initiative while working with children of deployed guardsmen and reservists, and they saw Purple Up! as a way to build awareness in their communities.

“It’s grown like wildfire across the United States and now DOD has embraced it, too,” Thompson said.

The 4-H went with purple because it is the color that symbolizes all branches of the military. “It is a combination of Army green, Marine red, and Coast Guard, Air Force and Navy blue,” according to the 4-H. “The goal of ‘Purple Up!’ is for military youth to actually see the support in their school, youth groups and the community.”