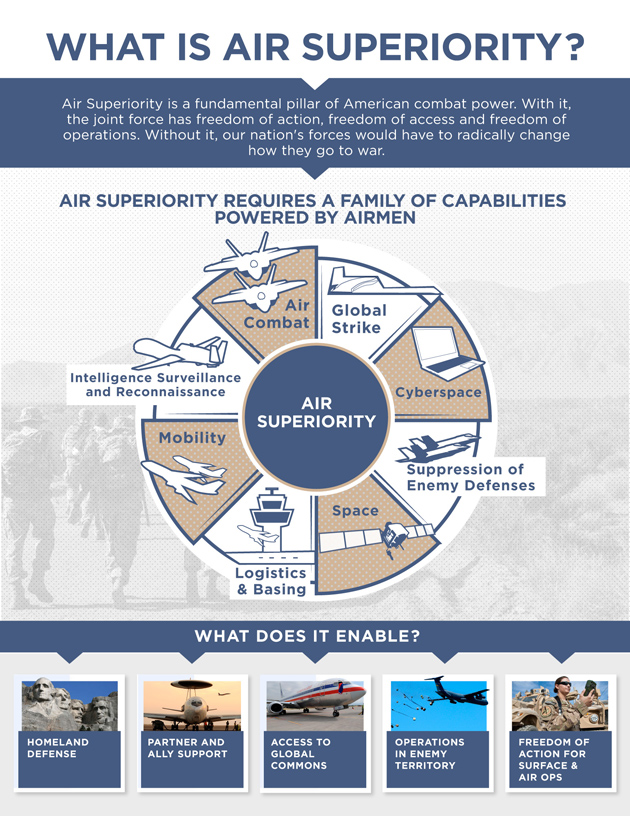 WASHINGTON (AFNS) — The Air Force introduced the results of a yearlong study focused on developing capability options to ensure joint force air superiority in 2030 and beyond during an Air Force Association breakfast April 7 in Arlington, Virginia.

According to Lt. Gen. Mike Holmes, the Air Force deputy chief of staff for strategic plans and requirements, the gap between the U.S. military’s air superiority capabilities and potential adversaries’ network of capabilities is closing at an accelerated rate.

In order to counter emerging threats, air superiority must be viewed as a condition, not capability, using multi-domain solutions developed through a more agile acquisition process.

“After 25 years of being the only great power out there, we’re returning to a world of great power competition,” Holmes said. “We need to develop coordinated solutions that bring air, space, cyber, electronic environment and surface capabilities together to solve our problems.

With direction from Air Force Chief of Staff Gen. Mark A. Welsh III, Air Force operators, acquirers and analysts formed an enterprise capability collaboration team to evaluate these problems from a new vantage point to propose solutions and lay out a plan to achieve those solutions as quickly as possible.

The ECCT looked to military experts, academia and industry for input and then conducted integrated planning, analysis and assessments. More than 1,500 submissions were distilled into 220 initiatives, which were then divided into various operational concepts. Eventually the team determined an integrated and networked family of capabilities operating across air, space and cyberspace was the most viable option.

“There’s no silver bullet,” said Col. Alexus Grynkewich, the Air Superiority 2030 ECCT lead. “We have to match tech cycles — some of them are really long. Engines take a long time to make, but information age tech cycles are fast. Software updates are constantly moving. So how do you move from pacing yourself off industrial age mindsets to information age mindsets?”

The answer, Grynkewich said, is parallel development of maturing technologies for sensors, missions systems, lethality and non-kinetic effects, on appropriate time cycles. The next step is to pull technologies out of each of those parallel efforts when they are ready and developing prototypes, experimenting and gaining more knowledge to determine if the developments are what’s needed in the field.

Using cell phones as an example, the colonel compared the current acquisition process to the way his team sees agile acquisition happening in the future in order to maintain air superiority. In the past, the Air Force has pushed for “generational” technological advances equivalent to the transition from flip phones to smartphones, he said. It should instead be pursuing incremental advances like the upgrades provided by newer and newer versions of smart phones and continuing to upgrade along the way instead of waiting for a revolutionary jump in technology.

“What we hope to lay out is a way to prototype and experiment with a number of concepts,” Grynkewich said. “You can start building and then move forward if experimental capabilities are determined to make enough of a difference in highly contested environments of the future.”

In order to achieve air superiority in the future, bringing agility to multi-domain acquisitions is crucial.

“We’ve talked about acquisition agility a number of times in terms of, ‘How do we save money’ and not wasting taxpayer dollars is absolutely important,” Grynkewich said. “But there’s an operational imperative that says we have to do this and if we don’t we’re at a risk of failing as an Air Force and a joint force.”

Around the Air Force: Jan. 4