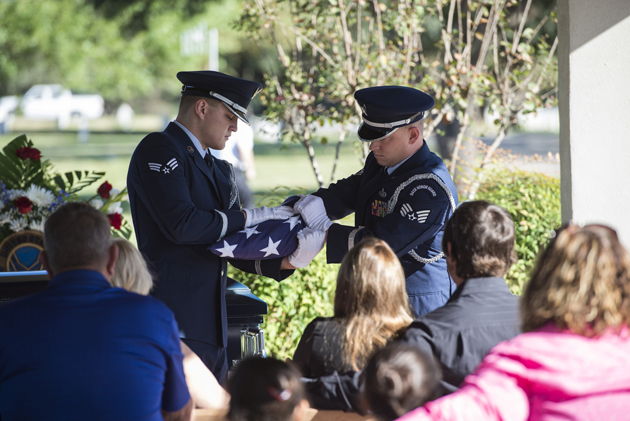 Hand-picked to serve as a member of the United States Air Force, my standards of conduct and level of professionalism must be above reproach, for I represent all others in my service.

Others earned the right for me to wear the ceremonial uniform, one that is honored in a rich tradition and history. I will honor their memory by wearing it properly and proudly.

Never will I allow my performance to be dictated by the type of ceremony, severity of the temperature or size of the crowd. I will remain superbly conditioned to perfect all movements throughout every drill and ceremony.

Obligated by my oath, I am constantly driven to excel by a deep devotion to duty and a strong sense of dedication.

Representing every member, past and present, of the United States Air Force, I vow to stand SHARP, CRISP and MOTIONLESS, for I am a ceremonial Guardsman!

The creed of the Air Force Honor Guard embodies the pride, history and professionalism of what it means to be an honor guard member.

For Senior Airman Adam Fiddler, JBSA Honor Guard member, the long hours perfecting facing movements and performing ceremonies at Joint Base San Antonio have helped reinforce a sense of pride and duty in the Air Force.

“It’s a really satisfying and fulfilling mission we do,” said Fiddler. “It definitely gives you a sense of duty. It reminds you why you do what you do, why you are here and why you signed up for this.

“Joining the honor guard ‘re-blued’ me in a sense. It definitely rejuvenated me as an Airman and as a person. I wouldn’t say this is fun, this is a duty, a mission that needs to get done regardless of any obstacle.”

Fiddler joined the JBSA Honor Guard in September 2014 and has performed everything from funerals to color details and POW/MIA ceremonies. However, the most satisfying part of the job is handing the flag off to a family member while performing honors at a service member’s funeral, Fiddler said.

As a member of the JBSA Honor Guard, Fiddler represents all service members past and present; including members of his own family who served in World War II and the Vietnam War.

“I really wanted to do it because I have family that served in the Air Force,” Fiddler said. “My grandfather was a technical sergeant during World War II at Kelly Field training tail gunners. My other grandfather was part of the 1st Infantry during Vietnam, and my dad was in the Army too, so there is definitely a family legacy.

“I remember going to my grandfather’s funeral and seeing the Honor Guard perform, and it made a lasting impact on me. Now I’ve come full circle, and I am able to repay that service to the families of other service members.”