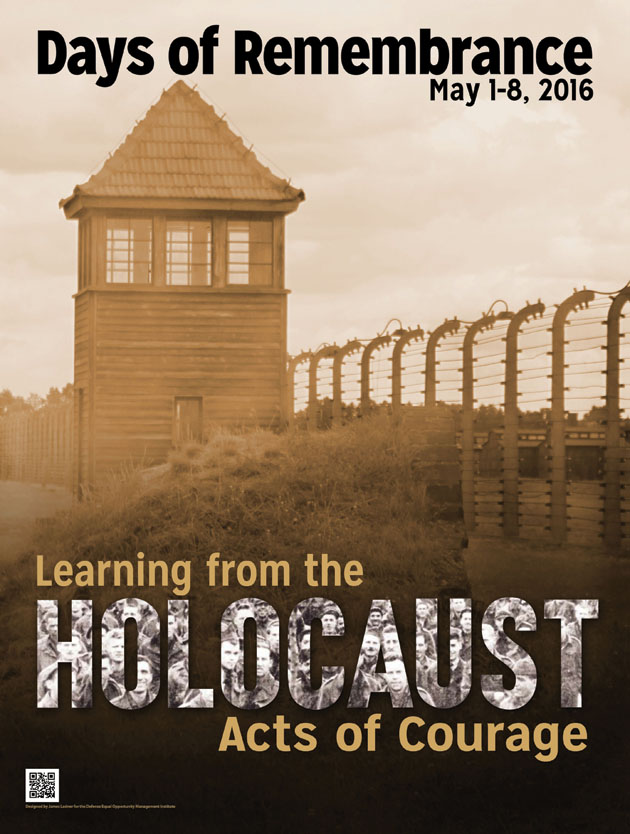 DAVIS-MONTHAN AIR FORCE BASE, Ariz. — The world is an ever growing, changing place full of culture, history and diversity. The choices you are able to freely make today foster the healthy atmosphere for the ever-growing change of tomorrow.

The key to democracy is freedom. Freedom, however, did not come without a cost.

This is the story of that great cost, the lives that were forever impacted and the heroes who would not let that freedom die.

We begin our story on February 27, 1933 in Europe. Adolf Hitler had just been appointed as Chancellor of Germany. Nazi’s burnt down the Reichstag building, a German government facility, to create chaos, enabling Hitler to seize control from emergency powers under the pretext of the nation’s security being threatened. He then proposed the Enabling Act, a law that would give him full control and tear down the German Democratic Republic legally and end democracy. Through fear he controlled the German people to vote 411 in favor over 84 against his bill, giving Hitler dictatorial power.

With his newly acquired power, Hitler declared the Nazi Party as the only legal party in Germany. With no one to stand in his way, he set out on a mission to “cleanse the world of all defect and deformity” through mass manipulation, propaganda and genocide. Hitler ordered the establishment of numerous concentration camps throughout Germany.

He then began establishing laws slowly stripping the European Jewish populous of their rights and freedoms and a law that would send criminals, beggars, alcoholics, and homeless to concentration camps. Then, on August 2, 1934, German President von Hindenburg died at the age of 87, enabling Hitler to become Führer, meaning absolute leader.

After taking office, Hitler slowly began passing laws stripping Jews of their common rights, for example: voting, taking away health insurance, owning land, legal qualification and serving in the military. This ultimately culminated in the passing of the Nuremberg Laws of 1935. This law included a dozen supplemental Nazi decrees that eventually outlawed the Jews completely, depriving them of their rights as human beings.

Then, on October 28, 1938, the Nazis arrested 17,000 Jews of Polish nationality residing in Germany and shipped them to the border of Poland. After living in lower than poor conditions for several months, one Polish Jew had enough. On November 7, 1938, Ernst Vom Rath, third secretary in the German Embassy in Paris, was shot and mortally wounded by Herschel Grynszpan, the 17-year-old son of one of the deported Polish Jews. This outraged Hitler whom reacted by ordering the destruction of many Jewish community and affiliated establishments including 7,500 businesses, 267 synagogues burned (with 177 totally destroyed) and 91 Jews who were killed in the outrage. This night, November 9, 1938, was forever known as the “Kristallnacht – The Night of Broken Glass”.

Life in Germany only grew darker over the course of time as Nazis invaded Poland and other countries taking and forcing Jews into Ghettos. The Jews were eventually forced into concentration camps where they were forced to work, eat and sleep in the worst of conditions. They slept on top of one another and ate nothing but bits of bread and water. Families were split apart and numbers were branded or tattooed onto the arms of the prisoners for identification purposes. They lost their names and identities and were known only by a number. The Jews lived in constant fear and many times were forced in great numbers into gas chambers or put in front of firing squads and murdered by the tens of thousands. On December 11, 1941, Hitler declared war on the United States and President Franklin D. Roosevelt asked Congress for a declaration of war on Germany saying, “Never before has there been a greater challenge to life, liberty and civilization.” (The History Place, 2016). Amongst the war, heroes emerged throughout Europe, taking in the refugee Jews, many times in factories as a cover, stating that they were there as prisoners to help with the war efforts. One such hero, Oskar Schindler, was an ethnic German who joined the Nazi party in 1939. He moved to Poland after the German invasion and became wealthy through his army contacts and cheap labor from the Jewish ghetto. After witnessing the atrocities committed against Jews in the ghetto, he started housing his workers and other Jews in barracks at his factory. He created a fake munitions factory and placed the Jews on “Schindler’s List” to protect them from the Nazis.

Another hero was Emilie Schindler who helped in her husband Oskar’s efforts to protect Jews during the Holocaust. Once, while Oskar was away, she encountered Nazis taking 250 Jews to a death camp. She convinced them that the Jews were needed at the factory. They were near starvation, and 13 had died. Emilie worked tirelessly to rehabilitate them, and all but three recovered. Survivors of the Schindler barracks saw her as a mother figure who did everything she could to protect and provide for them.

Though heroes arose, their efforts could not stop the evil force that was increasingly taking over all of Europe. On January 20, 1942, a meeting to commence “The Final Solution” took place. The meeting discussed the extinction of all 11 million European Jews and that it would commence immediately. Jews, along with other races that Hitler deemed inferior, were sent from Nazi-established ghettos to be killed at extermination camps where they used Zyklon-B pellets in air tight chambers. These chambers were disguised by the Nazis as shower rooms, and depleted the air of oxygen causing unconsciousness and subsequent oxygen starvation. This evil force continued for several months. What the Nazis did not count on was the escape of numerous Jews during this time who would go on to tell other countries, including the United States, of the dyer turmoil Germany was in.

Over the next year, word spread of the disastrous state of Germany and the inhumane oppression of the Jewish people by the Nazis. The world could not stand back and watch any further; it had to take action and it had to take action fast. With the help of allied forces, the United States, along with Great Britain, prepared troops and war materials. On June 6, 1944, they stormed the beaches of Normandy. Blood was shed and lives were lost, yet this day would be marked as the single most important day of World War II. This day allowed for the allied forces to establish a beach head and a foundation of equipment and reinforcements. From this point, allied forces pressed forward, taking over land and establishing its dominance. All the while, Russian forces pressed from the opposite side, ultimately suffocating Nazis forces while liberating Jewish ghettos and concentration camps in the process. Forces continued to advance, surrounding Berlin where Hitler’s bunker was located. On April 30, 1945, Hitler committed suicide in his bunker.

In the end, the allied nations banded together to defeat Hitler and his evil regime. During the conflict, 6 million men, women and children were murdered by the Nazi regime. By 1945, nearly 2 of every 3 European Jews had been killed as a result of the Holocaust. According to, The United States Holocaust Memorial Museum, the word Holocaust originates form Greek origins and means “sacrifice by fire.” This reminds us of the sacrifices that the Jewish endured during this horrific time in history, by the fire burning in the evil eyes of the Nazi regime. Though like a phoenix through fire comes a new birth of a stronger culmination of the Jewish people and the world as a whole.

We observe the Holocaust to hear the courageous stories of those fortunate to be living amongst us today who witnessed the tragedy and suffered many losses in their lives during this period of time. On May 9, 2016, at 1 p.m.at the Desert Dove Chapel, eight survivors will share their memories with us so that we may never forget or repeat the mistakes of the past. Information provided throughout this article was derived from the Defense Equal Opportunity Management Institute web page. For more information on the event please contact the EO office at 520-228-5509.