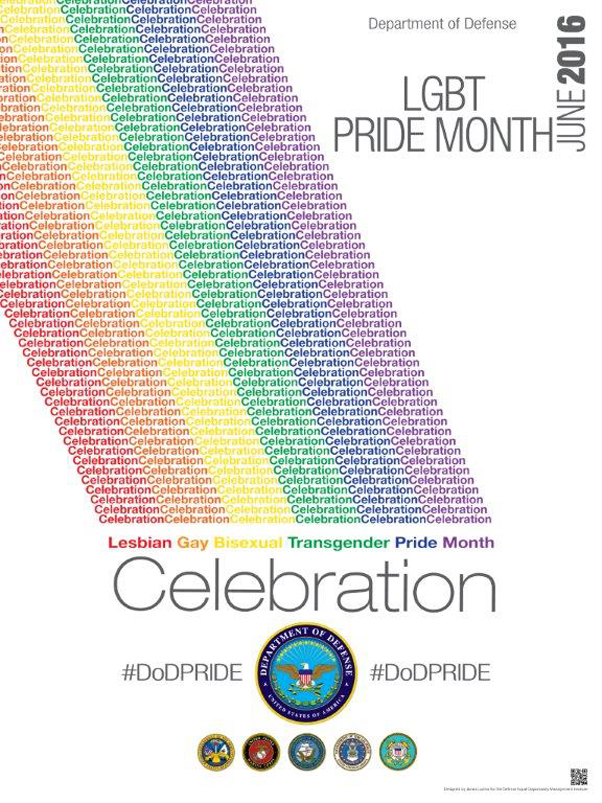 Our nation was founded on the principle that individuals have infinite dignity and worth. The DoD, which exists to keep the nation secure and at peace, must always be guided by this principle. In all that we do, we must show respect for our service members, civilian employees, and family members, recognizing their individual needs, aspirations, and capabilities.

“The Department of Defense has made a lasting commitment to living the values we defend – to treating everyone equally – because we need to be a meritocracy.  We have to focus relentlessly on our mission, which means the thing that matters most about a person is what they can contribute to a national defense” (Carter, 2015.) This article acknowledges the painstaking labor of Americans – whose personal sacrifices and determination were instrumental in the struggle for civil rights.

June was selected as Pride month to commemorate the events of that month in 1969, known as the Stonewall riots – an event that lasted three days. Patrons and supporters of the Stonewall Inn in Greenwich Village, New York, resisted police harassment of the LGBT community (The White House, 2009). The Stonewall riots were recognized as the catalyst for the Gay Liberation movement in the United States. However, the struggle for civil rights in the LGBT community actually began much earlier.

Dr. Frank E. Kameny fought for gay rights more than a decade before the Stonewall riots.  He served in World War II, and later as a civil service astronomer with the U.S. Army Map Service (Smith, 2016). According to the Library of Congress, Kameny was fired and banned from federal employment in 1957 because he was gay (Francis, 2011). He was not the only one; more than 10,000 gay and lesbian employees were forced out of their jobs during the 1950s and 1960s.

After being fired, Kameny filed a lawsuit against the government which he lost. Losing the first lawsuit, Kameny filed an appeal of which he lost.  He brought the first civil rights action regarding sexual orientation to the Supreme Court of the United States, arguing that the government’s actions toward gays were “an affront to human dignity” (Smith, 2016). The Court denied his petition. He preserved and continued to fight for civil rights for 18 years, until the U.S. Civil Service Commission reversed its policies excluding homosexuals from government employment. Fifty years after he was fired, the U.S. Civil Service Commission issued Kameny a formal apology for being fired solely on the basis of his sexual orientation.

On 1 June 2009, President Barack Obama issued Proclamation No. 8387 for Lesbian, Gay, Bisexual, and Transgender Pride Month. The President pointed to the contributions made by LGBT Americans both in promoting equal rights to all regardless of sexual orientation or gender identity. He ended the proclamation by calling upon the people of the United States to “turn back discrimination and prejudice everywhere it exists”. On 22 December 2010, the “Don’t Ask, Don’t Tell” (DADT) Repeal Act became law (Lee, 2010). Certification occurred in July 2011, and full implementation of the Act occurred in September 2011. LGB military members can now serve openly, with honor and integrity.

In June 2015, the DoD updated its military equal opportunity program to protect service members against discrimination because of sexual orientation. The Department’s ongoing commitment to living the values it defends, includes treating everyone equally. Diversity is more than race, gender, and ethnicity – it means diversity of thought, ability, background, language, culture, and skill.