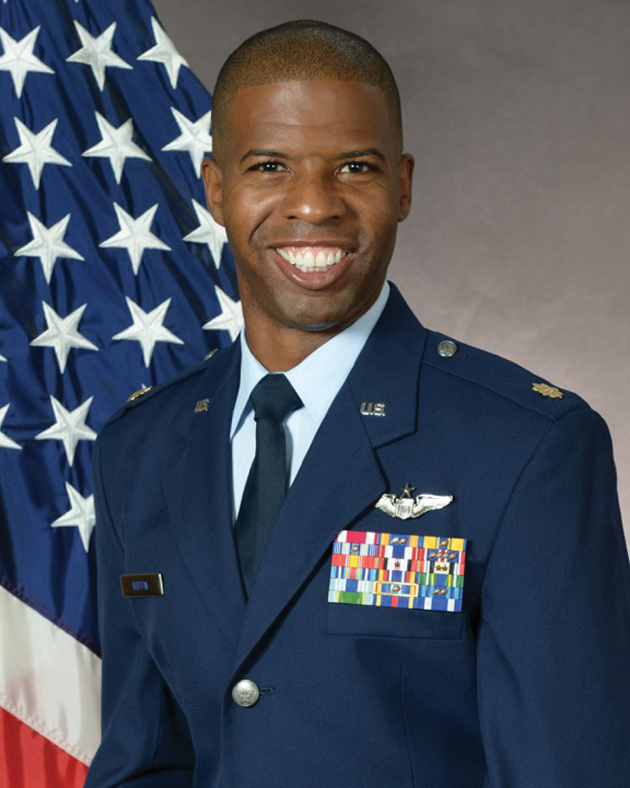 JOINT BASE SAN ANTONIO-RANDOLPH, Texas — Maj. Kenyatta Ruffin, an instructor pilot with the 469th Flying Training Squadron at Sheppard Air Force Base, Texas, will be recognized during the Shine a Light segment of the 2016 BET Awards to air live, June 26 at 8 p.m. PST/7 CST.

Through Shine a Light, BET recognizes individuals who have made a remarkable effort in supporting the African American community. BET chose to highlight Ruffin due to his impact as the founder of a non-profit group called the Legacy Flight Academy. This organization dedicates its mission to assisting youths in discovering their passion in aviation careers and increasing awareness of benefits and opportunities in the military.

Even at the young age of 5, Ruffin dreamt of becoming an astronaut; he began flying at the age of 13. The numerous support and mentorship he received led him to attend the U.S. Air Force Academy, and later became an F-16 fighter pilot.

Ruffin wanted to provide youths with the same opportunities he received growing up, so he volunteered as a flight instructor with Civil Air Patrol and other flight programs. He spoke at high school graduations, open houses and other mentorship events. His admiration for the Tuskegee Airmen and his passion for aviation led him to the idea of the LFA program.

“The impact he has had on the students, volunteers, and his staff has been life-changing,” said Capt. Kenneth Thomas, Combat Systems Officer instructor, 479th Student Control Squadron, Naval Air Station Pensacola, Florida. “Since meeting Keny, we have touched the lives of over 330 underrepresented youth, and have given them a pathway to aviation, and a future without boundaries.,” added Thomas, who is vice president of LFA.

Ruffin said the Air Force core values have made a major impact on his life and the organization.

“The idea of sacrificing, serving, helping others and giving back are encompassed in the core values and one of the reasons I created the LFA program.”

“I couldn’t think of a better Airman to be highlighted at the BET awards. He has devoted his entire career reaching back to lift up those coming up behind him,” said Col. Carolyn Benyshek, Air Force Academy director of admissions. “When he starts to talk about the opportunity he has had with the Air Force, younger men and women are able to see that they can have the same opportunity. “

Since joining the Air Force, Ruffin has deployed several times to Iraq and Afghanistan. He currently serves as a Euro-NATO Joint Jet Pilot Training T-38 instructor; and will soon attend the School of Advanced Military Studies at Fort Leavenworth, Kansas, where he will study military strategy and operational design.

“Being highlighted at the 2016 BET Awards presents an opportunity for me to be able to continue to engage the minority youth to let them know about careers in the Air Force, in aviation and STEM fields,” Ruffin said. “I see this as a platform to continue what I am passionate about, which is to inspire others and motivate them to succeed.”